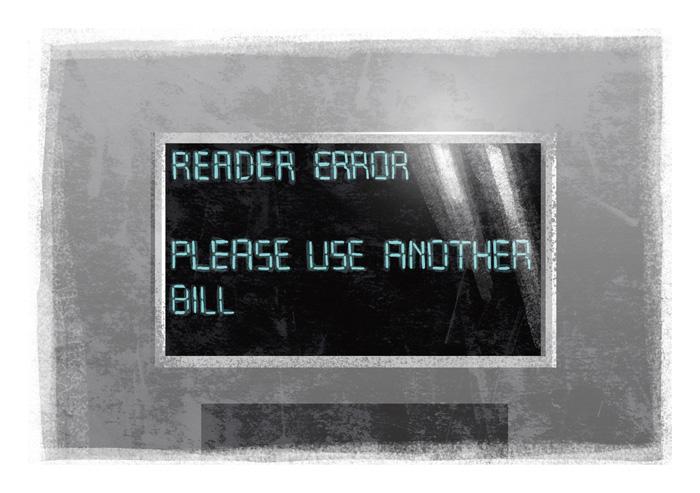 The end! :( One more post to go…
Thanks for all the support, I thought this would go completely under the radar at least for now. Much appreciation!

Nice ending, and great story through out. I do like the colour and texture in the images and the shapes and the absence of lines.

This was a really fun comic to "read" through. I enjoyed it--it was simple, elegant, and told a good story without any words other than the few lines in the beginning. ^___^

This was fun, short tale. There's a movie that's very similar called Twenty Bucks. It follows the story of a twenty dollar bill as it's passed between a man who's engaged to be married, a stripper, a little kid, a robber, a homeless woman and some other stuff in between. [url=http://www.imdb.com/title/tt0108410/]Here's the IMDB link.[/url] I remember that Christopher Lloyd played in it. Despite the similarities, this comic was fun to look through. I like these silent types where the pictures tell the whole story.

Thank you everyone! Coydog: Fortunately this doesn't happen to me, I'm a UK dweller and our machines only take coins. Dueeast: Ha, good idea. Polkster: Tell me about it. fuku: I'm glad you think so. I wouldn't even know how to go about doing that though. Hariku: I knowww. I really regret not being able to do more. I had to cut big chuncks out the script to meet deadliens, the whole thing is half what it was meant to be. blntmaker: Yep, I have some pages from my next project done so I'll get right on posting them very soon. Redemption: Thanks. It makes me really glad to hear that. I can definitely say the same for your work.

Congrats on the feature! The sequel (and it would be great if you had a sequel) should be "Quarter!" XD

Hey, alright! Featured! Well-deserved! I still say you should submit this to a publisher for hard-back novella printing despite having already printed a copy for yourself! Share it with the world, that type of thing...!

I demands credit for helping spawn this idea! Okay, well technically I got it from one of my coworkers at a previous job, but I was the one who passed it on to Pixie who passed it on so... yeah! Good job, Tom. You should totally illustrate books for a living after this.

congrats on the feature!

Congrats on the feature! It was a very well done story!

Congrats on the feature! This was a great read. Very unique!

Wow, this is a really cool story. There really is no dialog, but I understand every page. Great job. CyberDog out.

Brilliant Storytelling. I was compelled to read the whole thing. Nicely done.

I love the idea of the comic. NEEDS MOAR!

Glad to see this featured. I love your use of colour, textures and the way you've composed each page. Wonderful work.

Congrats for being featured!

YOU GOT FEATURED OH MY GOD, CONGRATS. Everyone, this is my little brother! *Basks in association* ;)

Featured and then that's that? This is a great comic - I hope you're doing other projects so you can post them here. Congrats!

Wow that was excellent! Nicely done!

I hate when that happens to me for real. XD