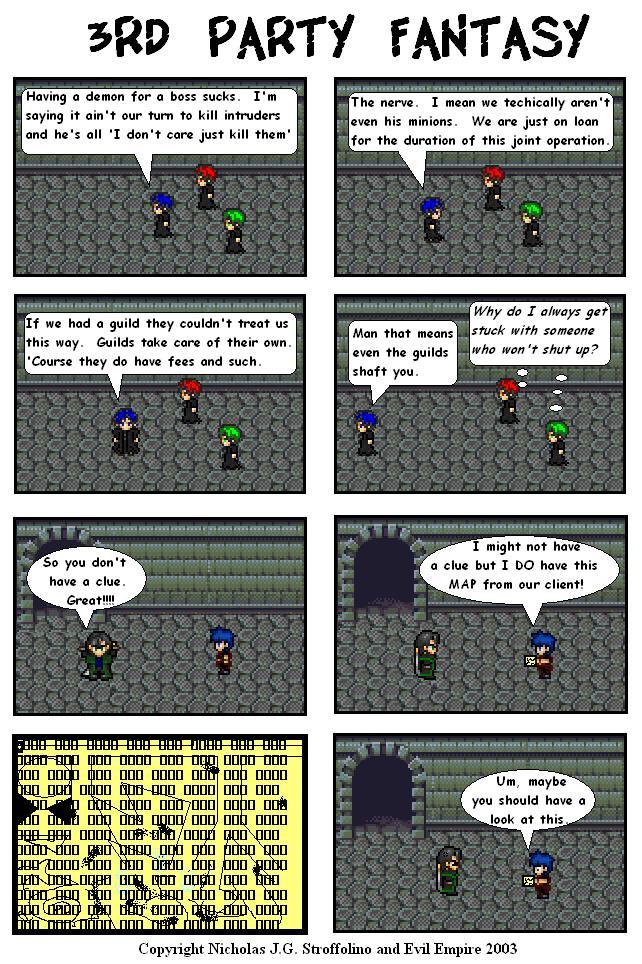 Arg, I'm sick. Your lucky I am reposing the archive otherwise you would be subject to one of my lame filler episodes. The filler originally meant to be easy one panel jokes often became full blown comic which really didn't save me any time except I didn't have to worry about backgrounds. A few I made ahead of time were even animated.

I'm currently toying around with assembling a a few 3PF short films (10 Minutes or so). I've always wanted to do them but I have no idea where I would host them, so for now I'm just focusing on making new issues. Issue 10 is the first issue subject to editing which I am working on tonight followed by a total reworking of issue 16 which was a black mark in the series archive.

This issue was important because it introduced the lackeys and square text bubbles. Originally I was going to vary the text bubbles a little to make it easier to follow who was speaking, however the square ones just worked more effectively and required less adjustments so they soon became the standard.

And not to ignore my other commenters but a big thanks to Amelius a long time friend, supporter, and creative collaborator. Thanks for the support Amy, you are awesome.

Heh, those three are funny. Oy that map, I'd go nuts trying to figure that out! Aww, and thanks,it's an honnor to be associated with ya! sorry to hear you are sick though!

*Happy sigh* I love this comic. All the great ones are starting up again... CTV, this... :D