A Murder of Two 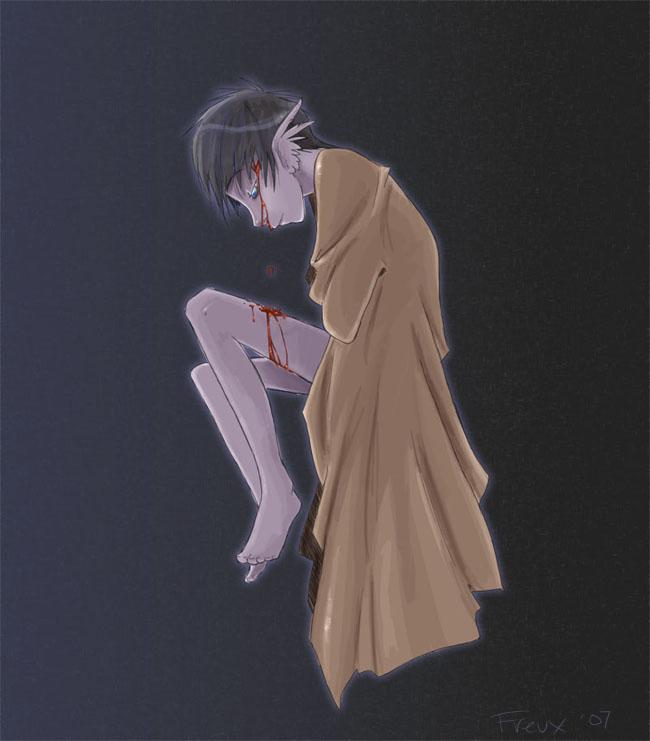 I didn't lose any of my comic's stats when it moved, only my place. Which is okay! I'd like to keep a better eye on it anyways. It won't actually start until the 1st, but I thought I would slap something up in the meantime so you guys can start re-bookmarking if you need/want to. ( I didn't have to change mine, but.. eh )

This isn't the cover. I'm working on a cover. I drew one pic for the cover but as I was coloring I suddenly realized it was the ugliest drawing EVER. .. Maybe I should hand-ink the cover. Anyways.. enjoy the wee pic!

... I *haven't* reviewed a Murder of Two yet? What is *wrong* with me? I memmer that I saw this a while back but I forgot to review. T_T I apologize profusely. Aaaaanyways. This has to be the coolest not-cover place-holder that I have ever seen. That blood is absolutely crazy. And frightening. But in a well-colored sort of way. (Well, technically all of it is well-colored, but I feel the need to point out specifics.)

Hands down one of the best covers I've seen in my life! :-O Great title, too!

LoL With all the effort you put into that "banner thingy coming soon" you might as well have done a temporary banner of that quality.

this is absolutely beautiful so far, these four pages. keep it up,. it does consume your thoughts some days

wow...looks like the covor to my comic...XD my guys in the same fetal position facing the same way X3 what a coincidance, huh?

The feeling is pretty much universal: back on fave list, woo-woo! =D

This looks like it will be good--and I love the ears! I'll keep checking in to see how things carry out!

Kristen - Thank you! I went and read through your archive. ( i have fast internet now. i can do that painlessly! ) And it was great. XD shaneronzio - THANKS! Jilly - i can't teeeeell yoooooou. it's a ssssecreeeeeeeeeeet. Mehehe. ( plus, it's going to happen again. HA HA )

Can you at least tell us what you were planning to happen in A murder of two??? You at least have to say what they were going to transform into??? Butterfly/moth people? Crow ear purple people?

consider yourself re-bookmarked!! btw thanks for commenting on my comic, I was like, "freux, who is that?" and then I clicked on your name.... tada! hehh... cool picture; I love the feet!!

Peipei - Thank you very much. n__n Sorry if the blood's a little icksome. ( it's probably the first time i've actually colored blood. ) It won't be a terribly gorey comic, but it does have its blood. MM - Thaaank you, sweetums. X3 Nekko and Sub - you guys ROCK.

Thanks for the update! I would have hated to miss it thanks. Without saying you are back on fav list.

Cool :3 I havent seen any updates from you in a while. I like this picture lots :) The blood dripping off of his face makes me cringe a little tho :o