A Quest for Divinity 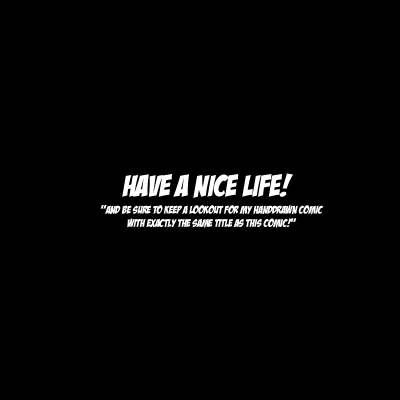 Pathetic for a goodbye comic, I know.

Time for an extremely long explanation.

I've been doing sprite comics for a while now.
At first they were fun, but as I got better, comics started getting harder to make and now, I just dont feel like making them anymore, Sprite Comics can be described as being a boat.
You got the useful peop– Well long story short, kids who dont wanna practise or get better and aren't committed are killing it for everyone and I dont wanna be in that boat.
Because its fucking sinking and I want to let them down while I get away on the little put-put boat that is Hand-Drawn, and eventually I might just climb aboard a big cruise ship.
Whatever. So yeah, I'm going to be launching 2 hand-drawn series that I've been planning for a year and a half now. I can draw well, in my own oppinion.
Sprite comics haven't sunk in vain though, through my extensive use of special effects, I have become very good at visuals, which should work out well.
Another reason why I like hand-drawn, FREEDOM.
I've never finished a megaman game in my life, I was just sucked into sprite comics. With this, I can start anew and have my own backstory!
Also, no sticking to sprites, original poses!
Another reason why Im quitting this comics is because I'm stealing its name, because it better suits my other comic. And no, neither of my 2 comics have anything to do with the megaman series, but dont be surprised if you see a little Blaze cameo here and there.

And, I wont be launching it on DD, well, I'm gonna avoid DD anyways, in fact, I want my own site so I dont have to have ratings, LeFarce's way has sorta rubbed off on me a bit, I guess.

But I'll try to hang around DD, help out some people and such.

Oh, and I might try and get you guys some drawings, if I can ever get a scanner and a tablet!

Oh and I'm getting a Wii and Twilight Princess sometime before Feb, I think.
Which is nice.

But feel free to PM me and stuff, I'm still here…

wow way then it should be

*sniff sniff* I like this comic a lot, but time to move on..

Alright, I'm fourteen now. And there might be some delay with the Scanner and Tablet, school just started and I need supplies.

Rather good. I've got a pretty good mastery of clothing and hands now. And I have finished the sketches for comic #1, script too. But I think I will be getting both a Scanner and Tablet for my birthday [Feb 3rd, I'm gonna try and try out new things and get in the hang of colouring and inking before I start. After Feb 3rd, check my DeviantArt account for art. http://kasai-ijin.deviantart.com/ My biggest problem right now is female faces and thats about it, but I'm slowly getting it =D [url=http://kasai-ijin.deviantart.com/]My DA Account for Now.[/url] PS: I'll have to get a new DA account because that account has FD's coloured drawings, theres a big distinction between mine and his drawing in style.

Pretty good, should be getting a scanner soon, don't know about the tablet though. But in the meantime I'm still sketchin' away.

So... How goes that drawn comic?

the background is grey, but the firstone has ZZ the second one says SIGH briefly and the last one one says "I've got the high ground" which is a little in joke.

No. Blame the government. Its all politics, really.

Blaze cares not for tiny humanoid's feelings, Blaze cares only for Skittles.

Dunno really, I might pop here and there, but I think there going anywhere fast anyways, regardless of how cool they are, but Leon, Drake and Deadman are getting cameos in HDAQD.

Hey, does this also mean you're quitting on Secret Isle and Final Flame?

Why would I give you one?

Good luck with the hand drawn! Although I dont read many (Okay, like two) sprite comics, yours was pretty good. =) I'll be looking foward to it!

First off, no, I am not gonna delete this, in fact, I urge anybody and everybody to post it on their comic [make sure you credit me though] and help the plague that is bad sprite comics! Well, its not going down, since I want to reserve the name and I'll most likely continue to use this to post artwork and stuff. Next, I will post the link, but I must give a word of warning. The Handdrawn A Quest for Divinity, has absolutely NO connection with the Sprite A Quest for Divinity except for its name. It features original characters, storylines and other things. Also, I'm new to drawn comics, so dont expect the quality of my sprite comics to carry over to my handdrawn, at least not for a while, but luckily Sprite Comics taught me some basics of comics as well. And finally, some of the content will be things that you may not find interesting and even expect of me. So yeah, we've just got to play the waiting game.