A Roll of the Dice 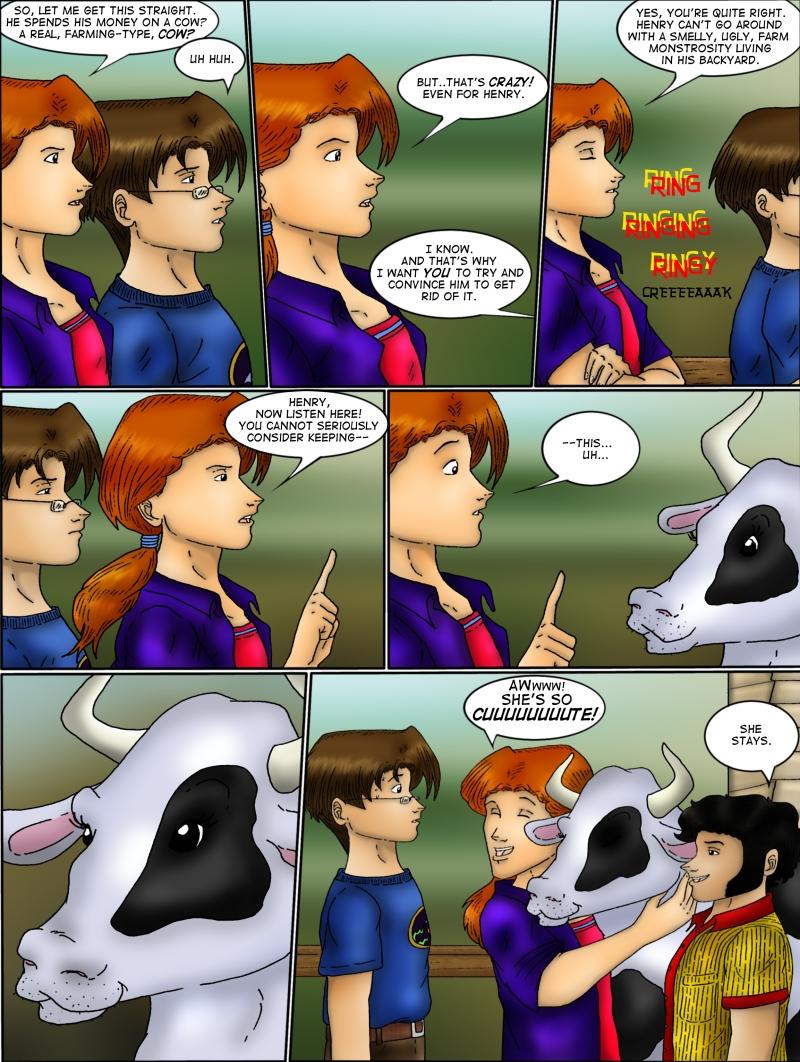 A Cow Conundrum: The Cow Wins.

When Andrew's on your side, you can't lose! It's proven fact between these three.

So, this wraps up our latest storyline. And it only took four months! Yay. :P

We'll be seeing Betsy from time to time. Now, the question is, when the heck will we see the next comic page? My next storyline is probably going to be the longest yet, with four interconnected parts that detail the first, unusual date of Toni and Jared. I've got the entire first part scripted and ready to be drawn, so the pressure's on CK to get to work.

I may be taking on my old job of flats colorist for a time as well, seeing as the other computer, used by my new colorist, is giving a lot of grief and refusing to boot over 50% of the time.

Either way, I would really like to get an entire part of the storyline finished and ready before I actually post any of the pages. I have a feeling the storyline will move smoother and be more enjoyable if everyone doesn't have to wait two weeks per page. :P

In the meantime, I'm going to post some of the oh-so-dreaded filler artwork now and again, so at least there'll be something here until the next storyline is completed.

@Trevor: I have no problem with people leaving 5s, but I find it hard to bring myself to leave them. I suppose I may have to start, seeing as it takes me about ten minutes to put my thoughts down into one coherent comment. :P

@Lulululuqtqt: Ha, ha! If that means you need to loosen up, I wonder what it says about me? I'm so darn proper I end up correcting myself whenever I misspell a word during a chat. I think it can get quite annoying after a while, especially when the person I'm chatting to doesn't notice until I point it out. :P

@Freefall_Drift: That's right. Now, I suppose the only thing missing is a moral. Oh, almost forgot. Don't steal cows, kids. Pay for them. That makes for a pretty nice moral, no?

@Patrickdevine: Actually…now I'm thinking a cow might be a good idea! I hate mowing the grass, I love fresh milk, and cows have such an endearing personality! On the other hand, one must get up early, and have a reasonable shelter (which would be taxed) for the winter. Hmm, I wonder if Henry thought of any of this? :P

@Flup: Well, as you can see, Andrew approves of Henry's little acquisition. :)

@Kid: Oh dear. Yes, I don't think Jared would have liked being the sudden owner of a new cow. Although it gives me an idea for a later gag….

I'm gonna get to work today! I'm hoping by the time I've finished this first part, maybe the comp will be up and running again...Sh-yeah, right. =,= I'm feeling motivated and these pages may get done faster than I assume, so cross your fingers and hope for the best! (If the comp ISN'T up and running, I'm gonna help with the flats...maybe even let our alternate colorist use the laptop.) Then we can have several pages in the coloring progress going at once. ^,^ Sorry 'bout the lack of backgrounds in this one...the whole next story arc should make up for THAT.

For me, I just read far too many comics on the web. Plus, it's planning season, meaning that my time to leave comments becomes limited.

Andrew wins everything that's the end of that

Yep, totally cute. I wouldn't be able to resist either ^.^ Sucks about the computer - I don't suppose kicking it would help.

She is cute, you have to give her that. I'm glad she's staying... She IS staying, right?