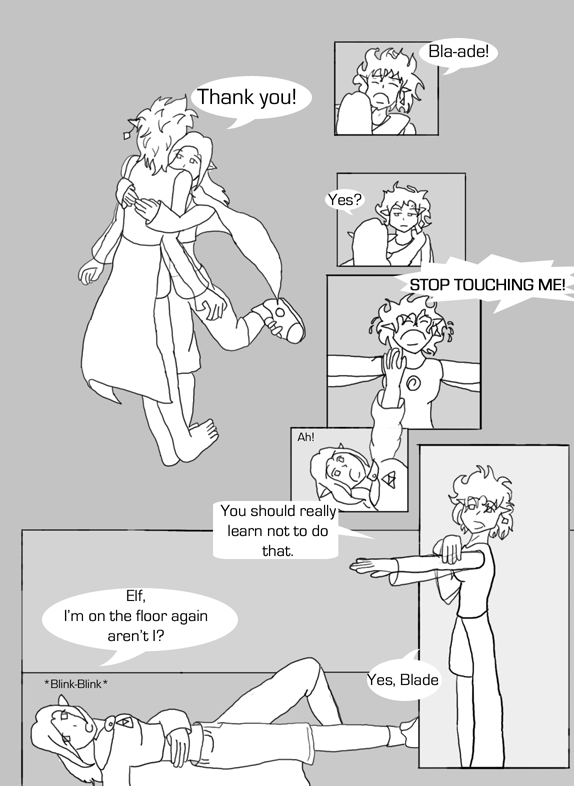 The sad thing about this page, is that Elf actually does that when I try to hug her. (I don't generally hit the floor, but it happens occasionally) She has a very well defined sense of personal space.

As you can most likely see, I inked this picture on the computer and didn't shade it. This will probably be a one time deal, though I might occasionally do this for single person sketches. It actually doesn't look too bad. But I prefer it when you can tell between Elf and Blade's hair colors.

Well, to respond to the questions from 2 pages ago. The Change can only be accomplished by Elf and Blade because when they changed the rules of their world, there powers became more limited. Elf now only Posses “Author Powers” (Introducing plot devices, introducing characters, etc) and Blade has the other “Artist Powers” (The ability to change the shape of objects, etc.) When either one of them tries to make a change that goes into the other's area, it has consequences.

Blade's attempt to change the shape of Mike into a rock had the consequence that now he can't be changed back. So, since changing the art style of their world is both a plot device and changing the shape of things, they have to agree and do it together.

So, yes they can change other things, it just doesn't take both of them.

PROTIP: Elf grope will earn you some high karate.

amazing characters & story btw, I made a fan art for the [url=http://www.drunkduck.com/DrunkDuck_Speesheez/?p=205957]Civil War - Riot Network[/url]. See Blade there ^^

This is a really cute concept! "The Change" was really neat!

Aww... Why doesn't Elf liked to be hugged? Loving it!