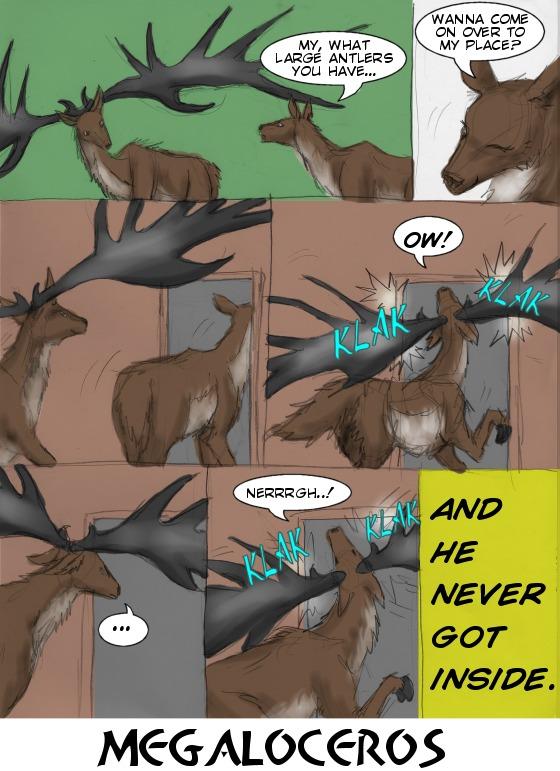 Megaloceros is extinct. More commonly known as the Ã¢â‚¬Å“Irish Elk,Ã¢â‚¬Â it was actually a deer (largest ever known), not an elk. It lived during the ice age, and the bucks had outstanding antlers that could grow up to 12 feet wide from tip to tip. As the ice ages ended, megaloceros died out. This is probably because as the land became warmer, more trees were growing, and with antlers that tremendously wide, bucks couldnÃ¢â‚¬â„¢t move through the new forests.

Female Irish elks did not have antlers. It is believed that they preferred bucks with larger antlers that could win in fights against other bucks.

Present-day deer sometimes struggle with their antlers, as well. Though they are much smaller than megaloceros and can navigate through forests without much incident, theyÃ¢â‚¬â„¢re not without problems. When two bucks fight, there is a slim chance their antlers can become locked together, making them vulnerable. If they donÃ¢â‚¬â„¢t get free, theyÃ¢â‚¬â„¢ll starve to death or be attacked by predators.

This is great! (elk are deer)

i like your series, its a clever idea, and youve made it funny

Ha! Great artwork as well as jokes that manage to work in the deficiencies of the species. Certainly hope there's more to come!

great stuff the buck stops there I guess