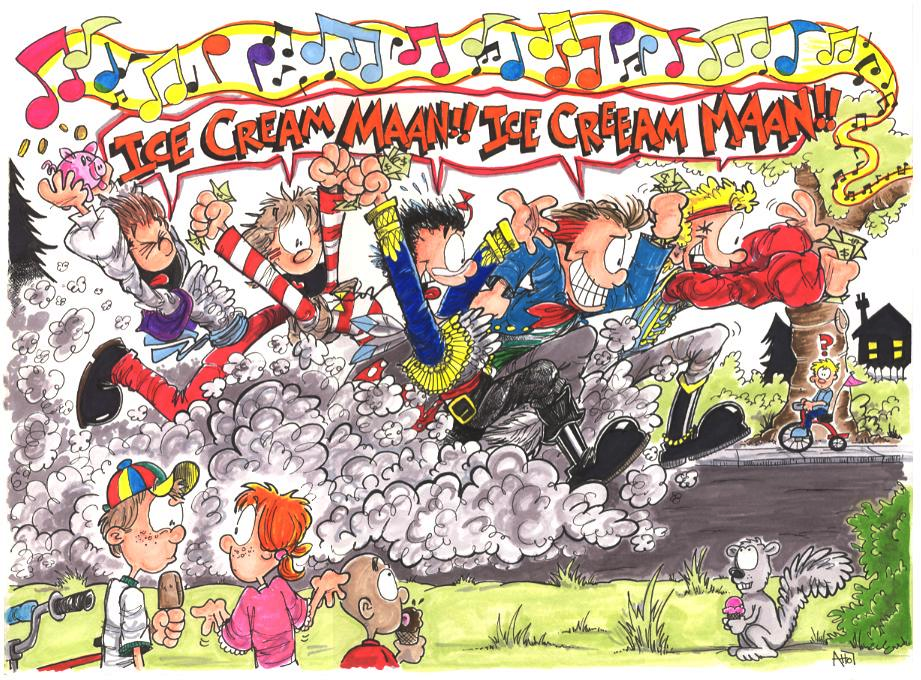 Back to the Ant Calendar Now…

This is the July page. I had to think of another summertime theme, so…this popped into my little brain. Those Ants like their ice cream…

Most of you know that I am working on a 2008 Antcomics calendar, and I have to be finished before Christmas (yikes…) so I am posting the calendar pages as I finish them here. I may sneak in a regular strip or two if time permits.

Hey, I have a few other things up here at DD now (for those who may not know).

First off, some awesome fan art can be found here:
http://www.drunkduck.com/Antcomics_Fan_Art

My other comic (an older one) about two corn snakes and their antics:
http://www.drunkduck.com/Slippy_and_Alice

And finally, “Cartoon Grab Bag” a repository for miscellaneous work, past and present–kind of fun, because you never know what you're gonna get:
http://www.drunkduck.com/Cartoon_Grab_Bag

PIGGY BANK!! That is so me!

Great pun! LOL! The stupefied look on the kid's face and the piggy bank are priceless! Funny! And it's so weird, here we don't usually see the ice-cream vans. We just go buy them in the nearest store. There WAS one cruising the streets somewhere around my place, heard the chime on more than one occasion - but never seen it. Hm...

I just had a DQ Blizzard (Snickers) mmm...

love the ice cream man. there should be a song about him

dracco: me too, especially since we already had snow over the weekend! :O master: Appreciate you stopping by. And yes, they do. Conned: OMG! Deprived!! And I'm curious about 'Italian' ice cream now... dgriff: Yes! Or an...ANTpede! Oooo, new word! Thanks also for checking out my other stuff. PitFace: Gracias!! SpAng: Ohhh...I don't know my Van Halen all that well. Must not be one of the 4 songs of theirs they play over and over on the radio. Oh--and not pirate themed---no wonder!! ShinGen: Thanks! Yeah, I relive my childhood through the Ants. It's a good thing.

lol; Perfect topic for July. Awesome work and it reminds me of my childhood. ^_^

HAHA! fuckin ACE,anty! this shit's got some movement in it for sure!

hee hee, that was great. Stampeeeeede! I'll hafta go check out those other comics of yours....

...I..I-I haven't *sniff* s-seen the *sniff* I-I-Ice-C-Cream M-M-Man in years....*sob* Such a thing does not exist in Holland (only 'italian' icecream stalls for tourists :S) But luckily I have memories of them from when I lived in England :D Hmmm...soft ice

Makes me long for July indeed!

ncbadd: yeah, those Ants are a colorful bunch! Cham kid: Weird, you know when I crave it most is when it's cold actually... :o) Ozoch: But the Ants are in their 20s, and look at them! (mentally they are more like....eight though) Kim: Thanks. And bummer, man! nightlight: How weird...I bet you can smell him comiing too... worstcase: Why does that not surprise me? Hehehe.

haha, i still do that when the ice cream man comes to our neighbahood. which, sadly, is not too often

nice! and happy as always. here, in the winter, the ice cream man becomes the fish man... drives around in the same car, same music.. just fish... That creates bad associations: when I DO want to get ice cream in the summer, all I can think of is "ice fish" or "fish cream" .. yuck.

Aww man, I live in the middle of nowhere... no ice cream trucks for me 8[ Lovely page, this comic is so colorful xD

Didn't get an ice cream man around here until I was 14, too late for childhood.

Mmm, ice cream...If it weren't so cold at the moment, I'd be SO tempted to slurp some down right now! Great color job! *as usual :)* And I love the looks on the kid's faces as they watch the Ants run by! *lol* =D

TheMidge snuck in while I was typing replies :) Thanks, Midgey! Yeah I remember those days as a kid. Our guy rang a bell though and drove an open jeep. I'm thankful we lived in a safe neighborhood after reading what you and Villamar said!

It seems Crocty and Corey are having a race today. :op Thanks you guys! SpAng: Good tune...did you make it up? Villamar: Yeeeouch. Sorry about that sore throat. Strep is going around here on campus. (O.O) I hope I don't get it. Ice cream is a great cure for anything! Brock: Yeah, I was proud of that dust cloud--wasn't so sure how it would turn out. Thanks a bunch! Yeah, I am physically exhausted after doing one of these...I will be relieved when I finish the last one! hukkah: Me too! PR: Yep, you did comment at DA...and yep, they are like 8-year olds sometimes! :o) cs3link: Thanks! :o) HarryQ: ohhhh boyyyy! Woweewow! The Ants in a Pugnug strip? Holy moly! That's HEAVY baby! (and a real honor)...

Love the page Amy! definitely captured the joy and excitement kids have when the ice cream man drives down the street! Villamar said: "I think I need some ice cream for my sore throat. I live in SoCal so I still see the ice cream man drive around. Though it's kinda scary cause it's like the ghetto Ice Cream man, where the ice cream truck is all battered, and there's bars on the windows. If it weren't for the pictures of ice cream on the sides and the music, I would think that it was an assault vehicle. Then again with the music it could very well be considered an assault vehicle." I don't live in SoCal or have a sore throat...but totally have that same ice cream van here where I live...one step away from Chester's van! Yikes!

Love it, love it, love 'em all. You realize the guys are gonna' close out my current story? Harry is dusting off his slide!

I think I already commented on this on dA. If I didn't, then allow me to now: Very nice drawing. They're so immature.