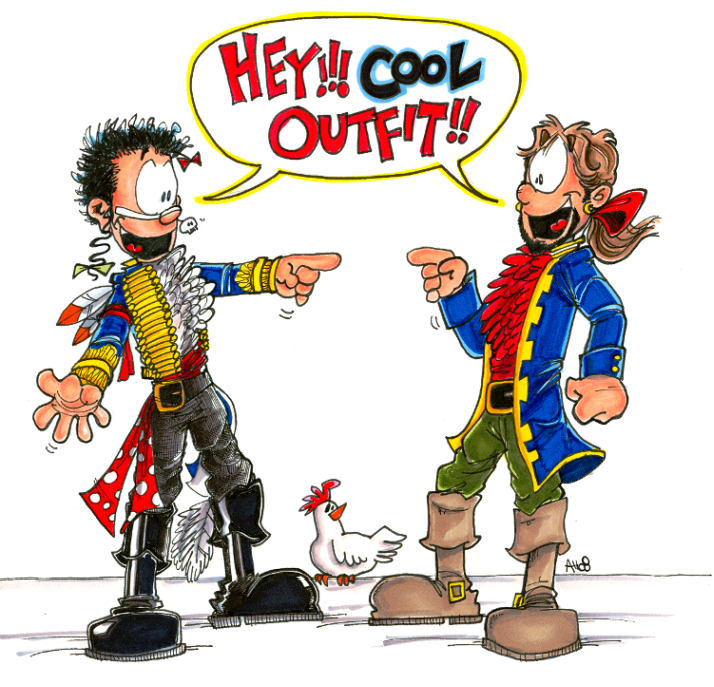 Today we take a little intermission from the “Bowling” saga to bring you some fan art I did for Eviltwinpixies, author of “Grog.” This is one funny, well drawn, well written webcomic here at the Duck featuring a clueless pirate captain and his crew, a bumbly bunch of misfits.

Captain Ridley isn't exactly your typical bloodthirsty pirate type–easily manipulated, not the sharpest cutlass in the drawer–and he has a pet chicken called “Polly.”

Really, give this comic a read if you haven't. A fellow ducker turned me onto this comic and I really don't see how I have been missing out on this all this time!! :o

The Bowling story will resume next week–don't worry! :o)

This won't count as a real strip, so the next Bowling one will be the ‘real’ #74.

UPDATE: I started an “Antcomics Blog,” where I will be posting extra goodies. I think I'm getting rid of my Tripod site (big pain in the butt), and I like this Blogger thing. So for extra stuff like rough sketches, storyboards, etc. Go there:

pirates and ants, eh? this sounds familiar... "hoist the jolly roger".. something...

I love it, and i have a question! How long does it take you to make a regular ants comic? Iquiring minds want to know!

That's funny! Now I have to go watch that episode of Seinfeld where he wears the "Puffy" shirt.

Love it! I'll have to check out that other strip too, thanks for the heads up!

This is one awesome pic! Two totally superb characters...! ^_^ *lol* Both their outfits look great! YAY for piratical attire! *swigs some grog* ;)

Sweet. I really like how you drew Grogs chicken buddy. Now I need to go watch the Goody Two Shoes video on youtube. ;)

Hey, I'm cool with a filler. Great one, too.

I don't know what it is about the way you draw, but it always brings a smile to my face. Very fun and animated feel to the characters. They look alive. Awesome stuff!

fantastic! Amy, I really love seeing your take on other characters! your renderings are always full of energy and dynamic!

Where can ya get one of them jackets...? I'm always shocked & awed by your coloring.

Ridley isn't much of a real pirate, either. ;) I'll gush about how much I adore this picture as soon as I'm not posting from an iPod in class. :D

Hahaha finally someone who appreciates the Ants' image the way it deserves ;)

Adam could be accused of violating the pirate dress code :P