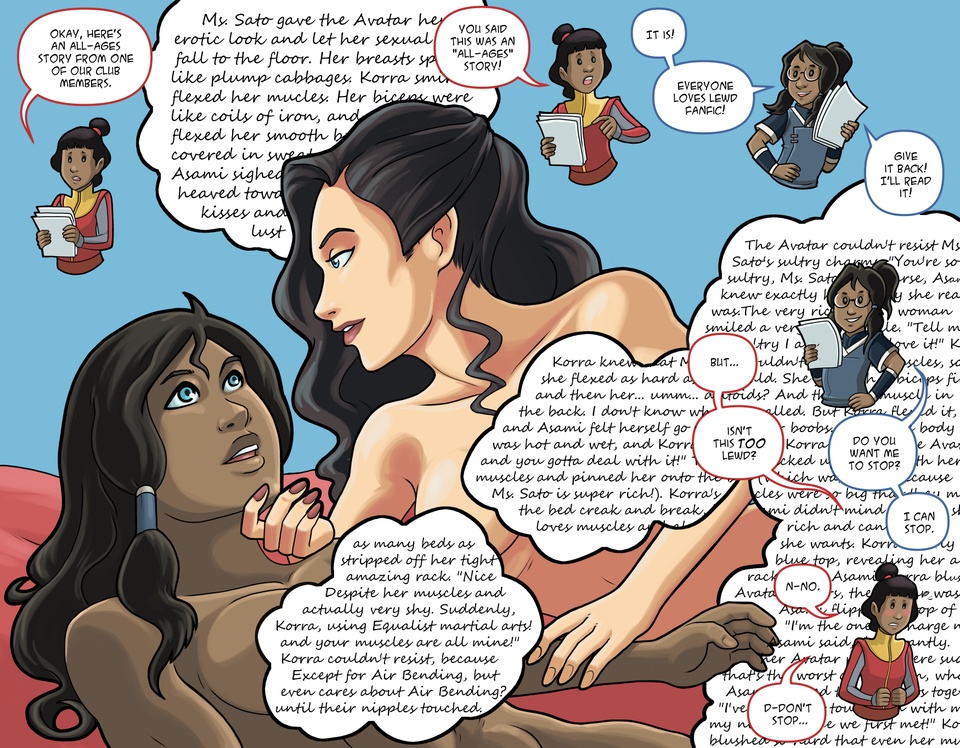 Hey, its been awhile! A friend commissioned me to do this follow up illustration for Fangirls, and I thought you’d all like to see it too.

Ms. Sato gave the Avatar her most erotic look and let her sexual red dress fall to the floor. Her breasts sprang free, like plump cabbages. Korra smirked and flexed her muscles. Her biceps were like coils of Iron that only she could bend, and her smooth brown skin was covered in Avatar sweat. The Avatar couldn’t resist Ms. Sato’s sultry charms. “You’re so sultry, Ms. Sato!” Of course, Asami knew exactly how sultry she really was. The very rich young woman smiled a very sultry smile. “Tell me how sultry I am, Korra. I love it!” Korra knew that Ms. Sato couldn’t resist her muscles, so she flexed as hard as she could. She flexed her biceps first, and then her… umm… deltoids? And that one muscle in the back. I don’t know what it’s called. But Korra flexed it, and Asami felt herself go weak in her boobs. Her entire body was hot and wet, and Korra could tell. Korra said “I’m the Avatar, and you gotta deal with it!” Then she picked up Asami with her muscles and pinned her onto the bed (which was huge, because Ms. Sato is super rich!). Korra’s muscles were so big that they made the bed creak and break, but Asami didn’t mind because she loves muscles and also she’s very rich and can afford as many beds as she wants. Korra slowly stripped off her tight blue top, revealing her amazing rack. “Nice rack!” said Asami. Korra blushed. Despite her muscles and Avatar powers, the Avatar was actually very shy. Suddenly, Asami flipped on top of Korra, using Equalist martial arts! “I’m the one in charge now, and your muscles are all mine!” Asami said, dominantly. Korra couldn’t resist, because her Avatar powers were suddenly gone! Except for Air Bending, but that’s the worst one. I mean, who even cares about Air Bending? Asami pressed their breasts together until their nipples touched. “I’ve wanted to touch you with my nipples since we first met!” Korra blushed so hard that even her muscles blushed. “But what about Mako?” The Avatar said. Both of them laughed, because Mako is actually dumb and everyone knows it!