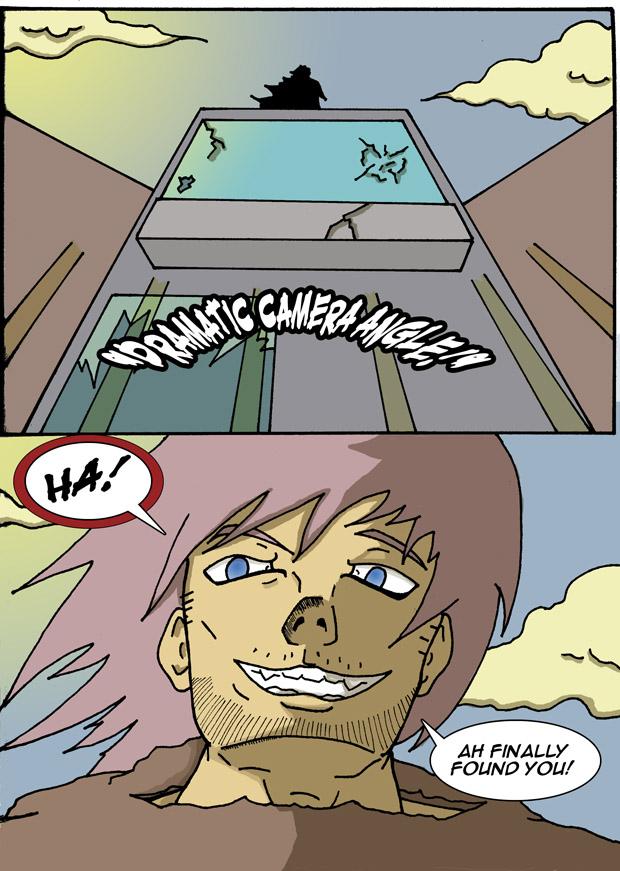 Okay, I updated a whole lot of pages here after not updating for a while. But here's the bad news; I'm putting the comic on a indefinite haitus. This is because I'm not really into the whole storyline of it anymore, and school's starting soon. The truth is I do have a lot more drawn, unphotohopped pages for it that I did during the vacation, but looking back on them they're not good enough to warrant spending a lot of time coloring on.

So instead of doing comics now, I'm doing Free Comissions for anyone who asks. Thanks for reading the comic, and maybe I'll return to these characters one day.

Also I have a DeviantART gallery with some stuff in it.

Hey, I don't think you're supposed to write the stage directions on the finished product. ;-)

i miss this comic...R.I.P Assassin Assassin. Maybe you can ressurect like Tupac.

omy gosh! you have gotten sooo much better! its me doshidania if you even remember i saw assasin assassin and was like DUDE i remember that so i came by to drop a line! =)

Great angles on this one! Keep up the great work!

hey its me, the creator of just another sprite comic before dd shut down. you know, the person who asked you why ninjas die so much. i have a new comis now. its like rurouni kenshin dut with video game characters.

Great camera angles. The coloring is awesome. I understand your decision to take a hiatus with all you have on your plate. Leaving on a cliffhanger was a cool idea! Your consistency has been remarkable. Whatever you do, I am sure you will be successful.

You guys getting angry around this (hiatus'd) comic is annoying. Huxley didn't you write a review of the first book of AA saying you really liked it though? Unless you're in a perpetual state of sarcasm... I'm very confused.

Lol Milky it's people like you that make me seem so superior. I didn't say I don't like it ( I think) or as far as I remember. But since I don't remember saying it I will say stop putting words in my mouth and go read a book. Your just making yourself look stupid. This is my last post for this page because I don't wanna polute this page anymore. But that doesn't include you. You can go continue talking to your self if you like. I recommend you go outside though and find that thing you call a.................... ohh yeah, Life. Good Day!

Dude, I'm not being a "sad sad fanboy." I'm just saying, why do you come back if you DON'T LIKE it? Seriously, its like stabbing your hand with a needle repeatedly, and saying "this sucks" but not stopping. You're not doing any good here, you're just critisizing without trying to help, making both ccs, you, and even all the rest of us feel bad. Please, stop stabbing yourself. You're bleeding on the rug.

I'm working on the art. If this comic returns the character designs'll be different and I'll do a real number on the story.

Ohh, and I'm trying to do what people do to me. They give me a one, I draw more and try to progress more to shut them up. That always works for me. This comic has potential but not the art. So get where I'm going?

Ha ha milky milky milky.........you sad fan boy. Anywho, I just give my opinion on each comic. (and ccs hasn't banned me from reading his comic yet.)

He says he likes it, or at least that's what he's told me in the forums. He's got a strange way of showing it through. I guess the 1 was for it going on haitus though. Little pointless to try to rate down a hiatus-d comic though.

Huxley, why do you always come back? You don't LIKE this comic, so dont read it!

Lol, If I knew you wanted me to I would have done it lol.

A one? That's not a very good way to show dislike for the comic ending. You could instead say something like "HEY WHAT THE HELL MAN?!!!" or something like that. Oh well, whatever.

You know, i'm not digging the texan accent on CD.

Wow, that's ont of the most dramatic camera angles!

xD AW are you kidding? That last panel you have of Chain Death is the best one I've seen from you yet! (It's totally awesome!) *oie oie* All right. A hiatus never hurt anybody. xO I shall await yer return.

Ok, but come back soon.