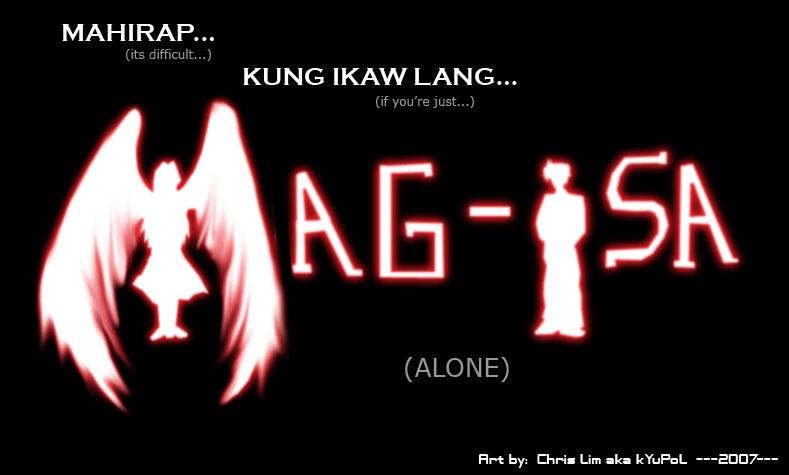 What do you think of my graphic-design skill (or lack of)?

I plan to have this printed on my T-shirt (just the red glowing part. not the other text lol).

I'm thinking of starting MAG-ISA or ASKAL… like… temporarily pull the parking brake on BK at one point… then pump in a couple chapters of MAG-ISA or ASKAL … then resume BK… I dunno. what do you think?

Though I'm still thinking of continuing BK. Maybe hits might pick up… as hits for BK as well as its DD rank have went down like a sinking ship. :( Compared to , this comic is seemingly sucking shit. Since sequels (mostly) suck eh?

Starting something new might be a great idea. Aside from MAG-ISA and ASKAL, my brother has a short story that won him an award in school. Maybe do that into a comic? I dunno but I think his story is crap. lol.

Or maybe… this is already a signal that doing webcomics isnt really for me and there are other things to do in life.

Fair enough. We shall simply exercise patience. Possibly order extra stocks of it.

[quote]So, is Shadow Nemesis finished, or just dead?[/quote] I dunno. I must say its on HIATUS. Cuz right now I'm in the mood to do my other comic: MAG-ISA.

So, is Shadow Nemesis finished, or just dead?

That's a real nice design, i could see it on a shirt.

Not bad Kyupol. Not bad at all man! I'm sure it'll look groovy on a shirt!

we're all warmd up, now for the coic to start :D

While it can be tedious to have more than one comic...it can also be quite refreshing to switch between them and update what you're currently in the mood for. Do what you feel like! You obviously seem very into in these two new comic ideas of yours.

Other things to do in life? Other than webcomics?! Blasphemy! =P If you are getting burned out on SN then take time off to work on something else. Work on whatever you want to make the most! If you are tired of making comics, take a break. Stats are encouraging but the main thing is enjoying this hobby yourself! If you lose interest then it will surely translate in your comic. I love the logo btw! Very nice silhouette of Claudita as a "M". I look forward to any work you attempt.