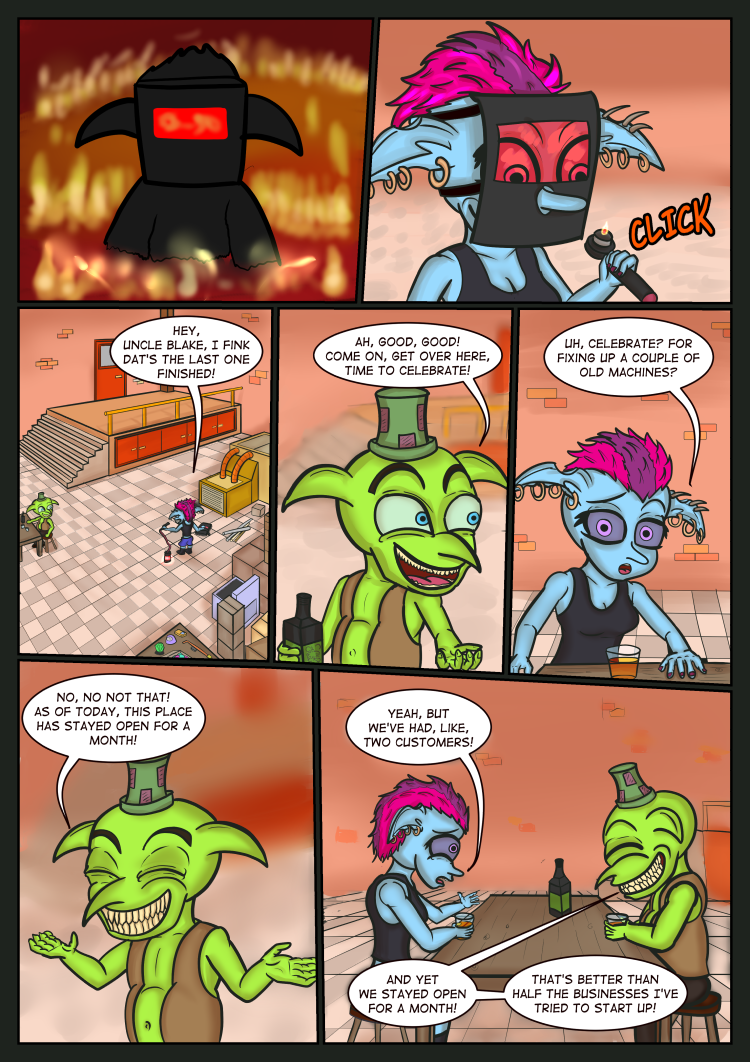 So, finally managed to make a start on one of the little side comics!
This has actually been planned for years in about a dozen different forms, at some point it was it's own thing, but same universe gives me a chance to offload some of the world building to this, and more importantly, gives me a chance to draw some goblins!
I should really thank Amelius, because I didn't quite think of using Picka's design here (the blue one) for a character for it until I read her comment! Actually, not being able to think of an appropriate assistant for Blake was a big sticking point for a while!
So, moving on, Blake here was last seen in one panel running a stall! He's moved up a bit since, opened a business, and roped in his niece Picka (Who's name doesn't get mentioned until next page, oops). She lived over in the Goblin homelands until a little over a month ago, and has a bit of a different accent as a result (Blake lost his quite some time ago!)
I'll save more of this explainy stuff for later though. I'm still terrible at side views, that last panel was agony, and I couldn't quite figure out anything for how to make them look right there. I'll work on it though!
This comic will be updated as an when I can, I plan on making this the “My main comic is giving me a migrane, I need to work on something else for a change” kind of deal… which probably means it'll update pretty often to be honest!
Edit: and of course the name got cut off! Knew I should have just made it Blake the Bilker. Oh well!

Yaaay I'm glad I was helpful! Hah side views are a pain, I know whatcha mean. For me, it's the arm/torso/neck combo that has me redrawing over and over. But I think you pulled it off, the pointy ears especially look consistent. (I forgot, pointy ears always give me trouble in profile too so I sometimes do the "Mickey Cheat" and have them pointed backward in profile too, haha)Glad to see more content from you too!! Congrats on new comic!!

Heh, I'll have to keep that one in mind next time they're giving me trouble! And thank you!

are they running a factory or a bar ?

They've definitely been two of my favourite characters to draw (up until that last panel!), even in their brief background appearances, so that is good to hear! :D