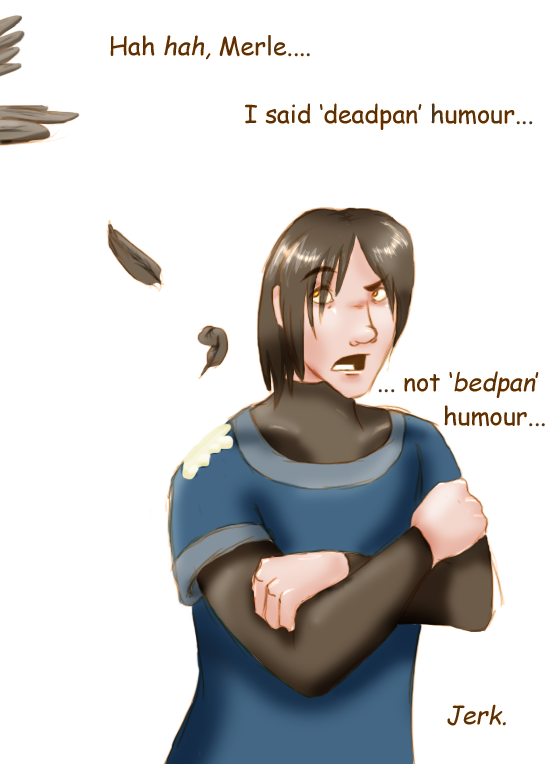 ^^ Eee~! Thankies many, many times to Aermis.

I find this piccy so amusing. S'just the concept… the more I think about it the funnier it gets. The best part is just Enoch's expression. It *so* fits. I like the feathers and hair and shading too. ^^ Hehe. The ‘Jerk’ part really gets me, it does.

Aermis, also known as Dementia Praecoxhas two comics here you can check out. Oooor you can drop by her DeviantART or Forum. ^^ She's real nice, I promise.

Aaaalrighty. The page shoooould be up on time next week. Ooor before then. Depends when I finish it. ^^;; S'been yet another lazy week. I apologize also for falling behind or not commenting on everyone's comics. January 20th I'll get back on the horse. There, a date. ^^ Ee.

LanceDanger: ^^ Ee! Funnybone hat! Sweet. *hugs* Happy new years to you too. *hands broom on fire* ^^ Now you have one too.

Inlad: Thankies, man. ^^ Ritter's reason for the broom will be revealed anticlimactically in the next installment. Actually, in the last version Enny was Merle's younger brother. Even said it at one point, but it was very fleeting and I honestly didna expect you to memmer. ^^;; But nooo worries.

Mutation: XD I hope you know I'm going to have to resist the urge to make that happen now. *hugs*

I think I'll let poor Enoch keep his hair and just chase him around and pet it. =D This makes me laugh! =)

Heh, Resist away! You could still make it happen later. Heck, I changed a gender of a character in the Alixixi story (Kavirna) Because most thought it was a boy.

Ahhh, okay. That makes more sense now ^_^;; Anywho, I does like this page very much, yes yes.