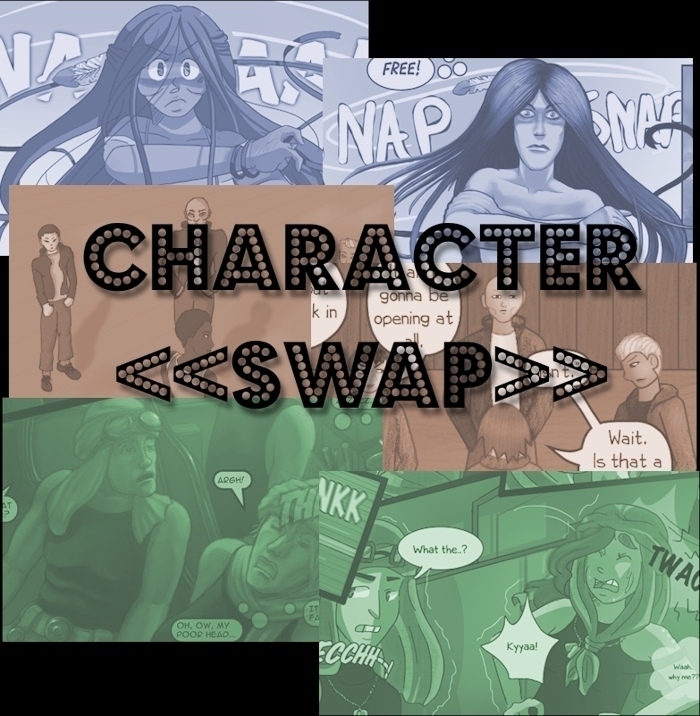 DD CHARACTER SWAP
(thought up by PitFace and OzoneOcean)

1. Post on this thread for a scene assignment.
2. When you join, you will be assigned a scene (a page or two) from the previous participant's comic and told which character to swap out for your own.
3. Redraw the scene in its native setting but with your own character replacing the original.
4. Post finished page(s) in this thread and/or PQ usedbooks to upload to the comic.
5. When someone else joins, give them an assignment from your own comic.

> There is no time limit on your contribution, but when someone else joins, please give them their assignment in a timely manner. (If you don't receive an assignment within a week, you will be allowed to pick your own scene.)
> You cannot go another round until you have completed your previous assignment.
> No “fish out of water” reactions. Your character has ended up in whatever scene he or she is in and “fits” into the world. – They will be dressed and equipped to fit into the setting and role but will also act in character. (This can be very close to the swapped out character or completely differently.)
> Assignments can be protagonist, antagonist, or side-kick type swaps but should be the central character in the scene.