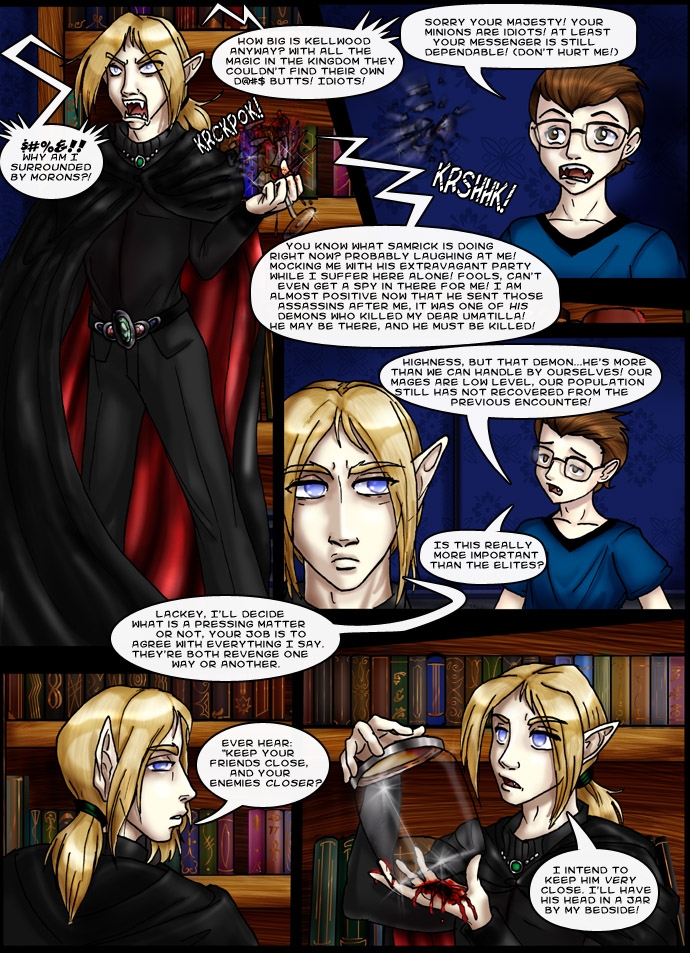 Since it has been a while I'll remind anyone who has forgotten that he's referring to Charby and Zeno as the “assassins” and particularly to Zeno, who is the only one he actually saw when the two came for Mye's rescue. Rodericke does think that Samrick is in cahoots with the elites to some degree, and that he sent Zeno and Charby to keep him in check after the Orycalope massacre. Not that I don't think you can't deduct that already from the comic, I just thought with the snail pace updates are coming in at we needed a refresher ^_^
So now the question is whether or not Roddy's gonna get someone into the party somehow…

I wonder if all elites have perfect eyesight? I mean it's not exactly an injury. The way he treats his underlings I'm surprised they don't all go an work for Sammy, or someone else. Maybe that's why they all look like geeks - bullied into submission. Don't underestimate Roddy. He is evil and a jerk, but I'm sure he has an ace or two up his sleeve.

Roddy has his own obsession problems.

@ charbyfan It isnt Zerlocke's head he wants, nor Charby it is Zeno's head. Zeno is mortal and doesnt have spider head powers.

His minions does not resemble a very good army at all :S

wait if he kept Zerlocke's head in a jar, wouldn't end up like claire's and become a spider!??

WOW! Rod looks ALOT better than in any of his previous incarnations, excellent work Amelius! He just looks more regal and royal to me, not just an average vamp in a cape. I also see he's as evil and crazy as ever, though I personally think he's DUMBER than Az's big brother Oleander if he actually believes he can kill Samrick, let alone Charby and Zeno. What kind of demon is Samrick anyway? And how did he and Rod become enemies in the first place? Did Rod used to be a vassal to Sam, who as King of ALL demons would likely have authority over someone who only rules over the vampires, and betray him?

Wow, the jar in the last panel is amazing! Really, fair dues!

Another unsuspecting victim of the most addicting comic on the web! Join us, Neriad, joooiiin uuusss...

Woooo...five days of intensive reading and I've finally fulfilled my vow to read the entire thing. One of the few comics I'd ever call a veritable tapestry of interweaving events and conclusions, with one story always flowing smoothly into the next, yet never lacking in epic battles or comedy. Wonderful comic, wonderful art.

It keeps on seeming like the glass shattering noise is "Krakpot!!" and I'm like, YEAH, HE IS!

"So ya-- Thought ya-- Might like to go to the show-- To feel the warm thrill of confusion-- That space cadet glow-- Tell me is something eluding you, sunshine?-- Is this not what you expected to see?-- If you'd like to find out what's behind these cold eyes-- You'll just have to claw your way through the disguise..." Just thought I'd drop a little bit of a Pink Floyd bomb on all y'all here! (My how I love this CD!)

@sims2fanatic: Thanks dude, or dudette. Which is more likely as The Sims 2 is a game more played by girls, though I DO play it. :P

GL with that one Rodericke... We can now see what he looks like high-quality (^_^) Cool!

havn't got through the whole story, but the beggining is pretty cool !!!

@Wolfer: It usually updates about once a week... sometimes every other... Rather erratically, but I still check it every day.

well if zeno's there charby is probably close by, and when you combine the two of those you get utter destruction.. hehe just imagine that, vampire frappe

haha nice but he might wanna watch his head if zeno goes demon on his ass otherwise BANG!!! *blows smoke away from finger*

I really like these comics. But I got one question: When is it updated? I just read through the whole thing and I have no idea on what days I should check back. Anyone help?

The brunette reminds me of a werewolf. Can't you just see him breaking out with fur and wolf ears, and howling at the moon?

I love how you have the authentic "krckpok" of the glass! ^__^ And Rod's hand in the last panel-- no mysterious cleaning power! Did it heal or is it still bleeding? eh. whatever. Still a good comic!