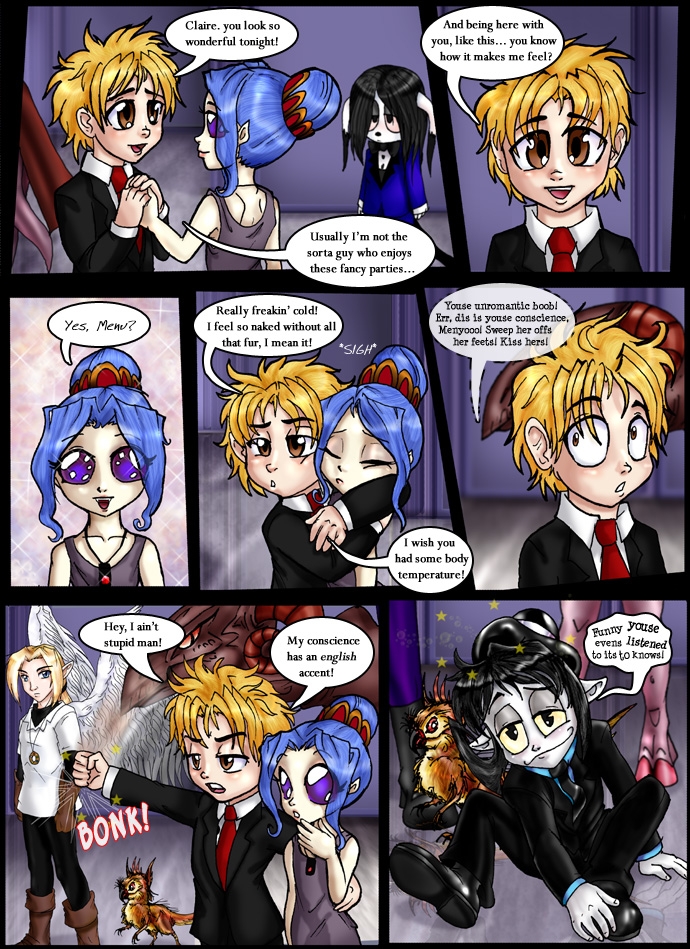 Of course, he's referring to Mikko, whom he's convinced is his conscience (both good and bad)
Only one guest today, the winged fellow in the left bottom corner is Sheik, who belongs to LinkHylia (and my scincerest apologies if he doesn't look quite right, I was a bit nervous drawing from description rather than visuals ^_^)
I know it's been a while since an update (and I really gotta get back on track with UIU, which I haven't forgotten!) but I've been busy…with something seeecret ^_^ (at least I dunno if I can say yet…no guessing though!)

"giggles galore" was the first thing that popped into my head when thinking of what to say here.

Haha! And that, ladies and gentlemen, is why you should read the archives before you crit an artist. har har *snerk* It almost looks like Menu did that on purpose

Tony just keeps getting the short end of the stick today, doesn't he? But he still has a zinger in there at the end.

yeah, he's drunk, and hurting in the face.

LOL, This whole page is awesome.

For a brief moment in time Menu was a real Cassanova, before shattering poor Claire's hopes like that, lol (i LOVE when she goes all sparkly eyed like that!). Tony seems to be having a good time despite the lack of a date, heh heh

Aww, Tony needs to just dance with Mye already! Instead of trying to play pranks and failing horribly at it D:

Wow his romance skills are just as good as mine... no wait there better.

u know i think ur pencil is much better

Wow thats a good comic. Did you draw those pictures?!?

this is a totally awsome comic!!! great job!