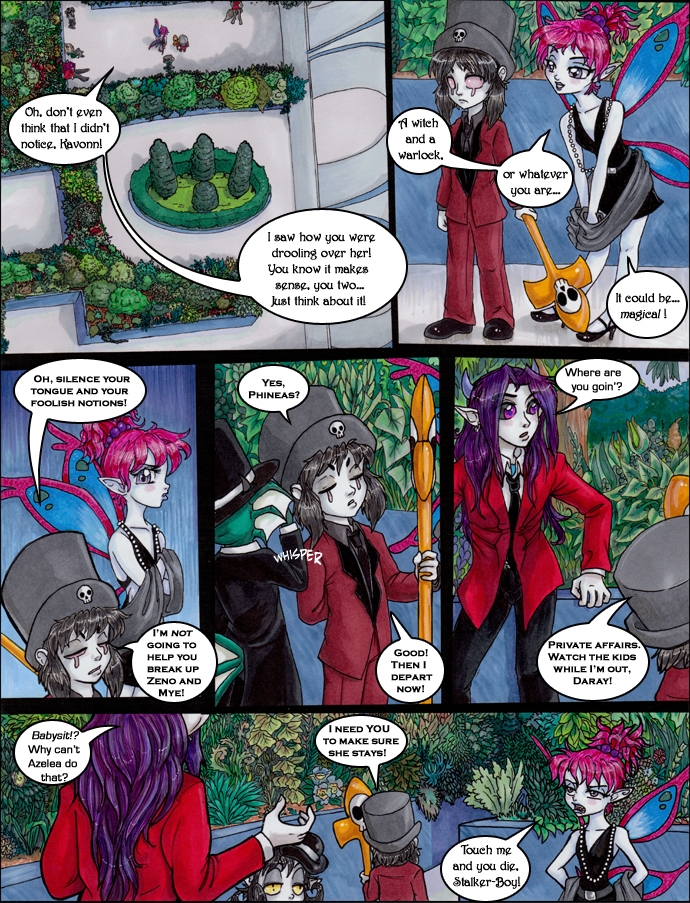 Hey everyone, sorry about the week and almost a half wait, I haven't even been on the internet all week thanks to a bout with depression. Oh boy!

Anyway the news on my hand, it is like we (including the first doctor of many that looked at it) suspected, it's a cyst. I'll have to get it surgically removed when I can afford it!

In other news, we finally got an exact date on when the Night School book is coming out! November 12 is when it will be in stores.

Also I would like to mention some really nice people we met at a comic convention last weekend! Nick and I were just discussing how cool it would be to meet more Drunk Duck members, and lo and behold we found some! Their site Strumhaus has a list of all the comics they are involved with, I recommend checking them out, it's good stuff! We talked to
(or Nick talked to, and I chimed in when when I eventually got over being shy) the guys involved with Evergreen Comics, Chaos Punksand World of Orendaand we got free buttons. And I like buttons!
I think it's a cool thing they're doing and I think it's good to support our fellow ducks, so go give them a looksee!
We also chatted at length with a cool guy who does a webcomic called ravilob. Overall, chatting with these guys was the highlight of the con for us ^_^
It was real fun, but sadly like at most cons, the artist alley was shoved in a faraway place out of the way of the main events and we would never have found these people if we hadn't seen Wonder Woman walking out of a revolving door (there was a inflato-dome building attached to the expo center) in fact we almost didn't find the con itself, except for we noticed the Batcopter was taking off near a stadium and so we asked Catwoman for directions!

NightReflection: He doesn't want Azzy following him to where he's going right now :)

I wonder why Kavonn is worried about Azelea? He hasn't watched her up to this point. Is he worried she'll go after Mye again?

There is a lot of obsession in this comic. And that isn't a criticism.

*giggle* You're just lucky Catwoman didn't give you the wrong directions just for a laugh...

Hey when did Phineas wake up out of his stupor?

Thanks so much for the shout outs! It was really great meeting you at the Screaming Tiki. It's not everyday that we get to meet the number 1 comic creator on the Duck. :)

Nick appears to have lost the brains that he was blessed with for a temporoary measure of time.

Strangely enough, at the main comic convention in Toronto, Anime North, the first thing you see when you walk in is the Artist Alley. It's kind of nice though, since that's the place where I spend most of my time and waste all of my money... Anyway, great page! Daray's always getting some hard times from women... Getting stalked by them or getting accused of being a stalker...

touch me and U die stalker boy LOL.

Your plant work is really great...! I wish I had that skill... *blub* I'll be reading more, you can count on it!

What a Batastical adventure! XD

Man, you do such work on the plants! The detail in the background is very admirable... Ahh, Kavonn is so stately--suave, sophisticated...^,^ *giggle* Your con experience sounds like something out of the Twilight Zone. XD

Pixies and pirates! This is awesome.

I agree with the donation drive, and I'd like to remind everyone of the Munchie Bear donation button at the top right of the author's comments. ^_^ Amy, if you ever need to talk feel free to IM me or call or email ok. ^_^

Jindra34, Kavonn is a lot older than he looks. it's okay Amy, I know that at the very least, I don't mind the wait. (I understand about depression, I just lost my mom last month and have been feeling down since then) Eep, a cyst? Well, hopefully your Charby swag and your book(Which I will be buying) help pay for it!

Kavonn thinks of all these people as kids?!?!? boy thats arogant.

Gorgeous page as always! I'm not sure if it's because I'm on a different computer or what, but the inking looks better than the other recent garden-pages. It's a gift you have, and I'm just thankful you share it with us at all! ^^ I'm sorry to hear about your surgery, but it's better to know, y'know? I hope you get enough money for it soon. Your health and your happiness comes before the newest page. Always. (insert serious eyes) *awkward pause* Um, someone else comment? Please?

Crossover? Does this mean I can expect a new episode of 3PF?!?