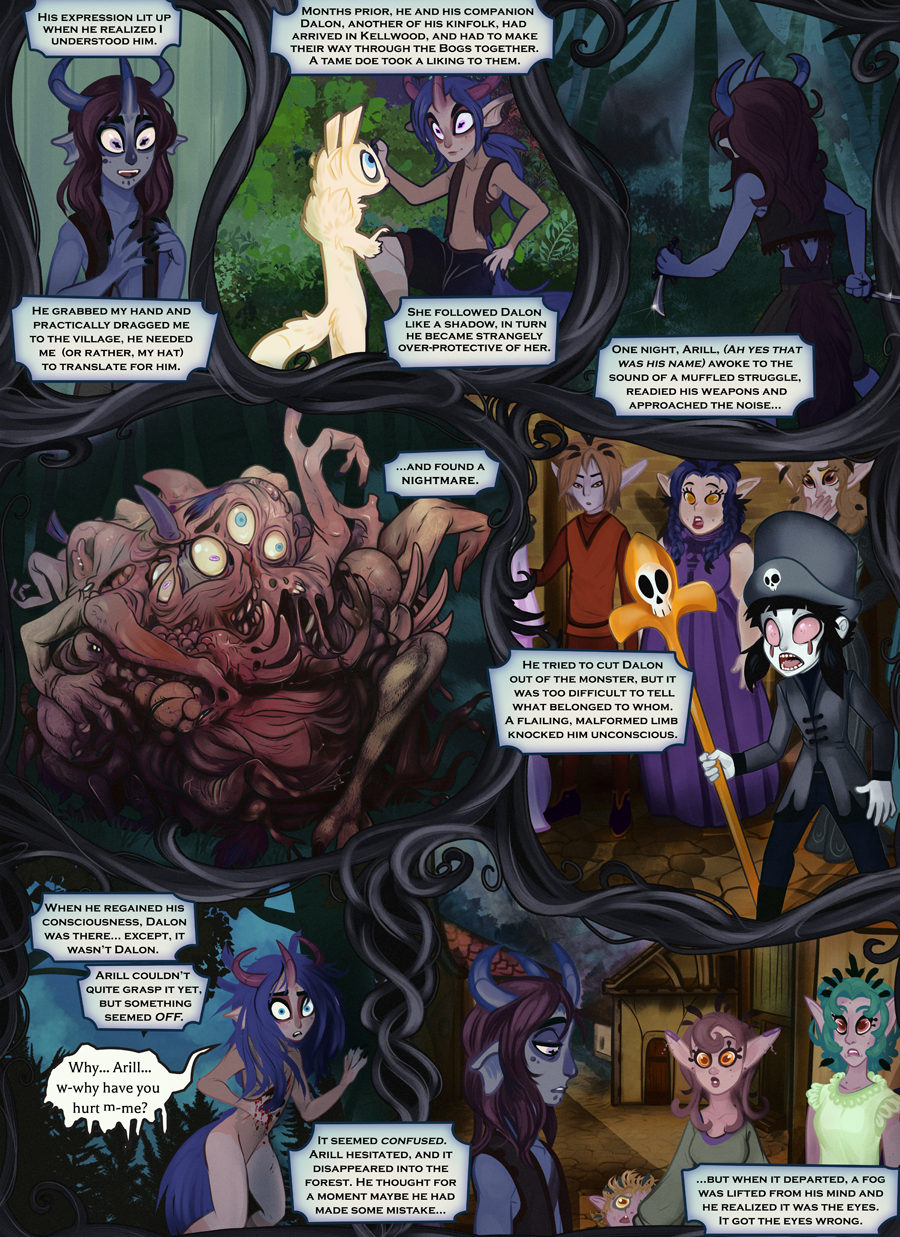 I know what immediately jumps to mind is a female deer (reinforced by the do re mi song!) when most people hear “doe” but much like sow, cow and jill, several animal species can be called does! Kangaroos and koalas, goats, rabbits, rats and mice, but also weasels! This creature appears most “weasel”, and I felt the word fit better than jill (used for ferrets) as it's a bit more quickly understood. I just find it cute, besides!

Kavonn's hat (though really who owns who?) has access to many worlds, so it stands to reason she understands many languages from those worlds, and beams that info right into his brain. Rather than translate for him though he used his staff to let him do his own talking. Translation spells are a thing after all!

Interesting factoid as applied to this page! Allegedly, caterpillars going through metamorphosis partially dissolve into a goop inside the chrysalis, and reform in the shape of a butterfly before they emerge. In a way, our changeling demon pal is doing that without the chrysalis…

*EDIT* CRAP CRAP well it seems some things looked like things they shouldn't have, so let my just say THAT WAS NOT INTENTIONAl! So here's an edit that hopefully doesn't look like dirty things are in there because it's all limbs, teeth, eyes and boils, no naughty bits!!!

I love the frames too, pretty as always Amelius!

The shift of artistic style in the flashback panels is a great touch by the way! I love it. Plus the gorgeous frames.

Whew, good to know then! I was having a mighty panic over it, when it was brought up on the other site. At first I thought it was over the general grotesqueness but something led me to suspect that it was something else... I feel really bad it left someone with that impression though? I did a shot-in-the-dark edit because nothing looked iffy on the hi-res, I figure with less things hiding in the shadow less chance of it looking suspect!

I feel like I should have held off on my "Kill it with fire"... because now THAT is fire-worthy! Comparing the uploads, I really can't see anything gross in there... well, I mean aside from being a grotesque mass of what the heck! but, eh, you know what I mean!