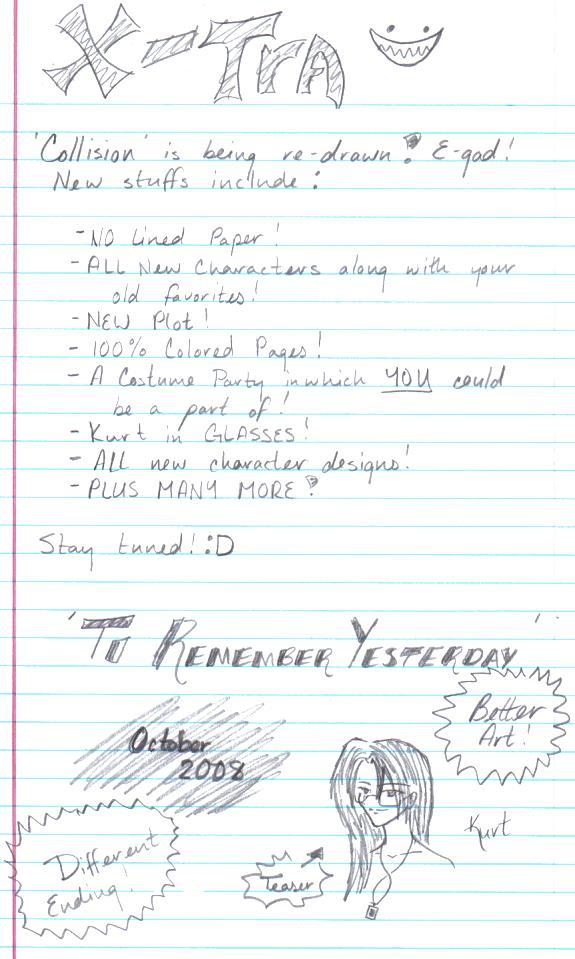 This is a small teaser for ‘To Remember Yesterday’ - the NEW version of Collision. Art will look mucho bein and no lined paper, so I know you all will be happy about that. Same characters, one or two will be leaving and new ones will be tossed into the mix. I hope you all like it - plus there will be a plot twist tossed in there. :) And as you all can see, a small pre-comic contest! Oooo…here's how this works: send me anything - a fanart, a fanfiction, whatever - about any character, and I'll put you in Chapter 2 at the party as your favorite superhero or villian! PQ me the stuff, including who you want to be, as well as whatever you want to be drawn as. Don't forget to tell me whether you're male or female. Gracias. But, here's the catch; you can't be Batman, the Joker, the Riddler, or Cyclops. Sowwy - but I'm already drawing Ethan, Kurt, Mikeal, and Mystery Person! as one of those four. Only DC or Marvel comicbook characters, pu-leez! :D And your character isn't limited to your gender - you can be Batgirl as a guy, or the Flash as a girl, for a few examples. Have fun, peeps! You have until the comic debuts. :)
Look for it in October!

Faust: I wanted to change it, because Kurt and Ethan aren't really...'colliding' this go around. It's more like later....and complications arise that I hope no one hates me for. XD I appreciate the thought, though. :3 Kitty: Shiz, kitty! I thought you had stopped reading awhile ago. XD I hope you both will partake, too. :3 *wishfully thinks*