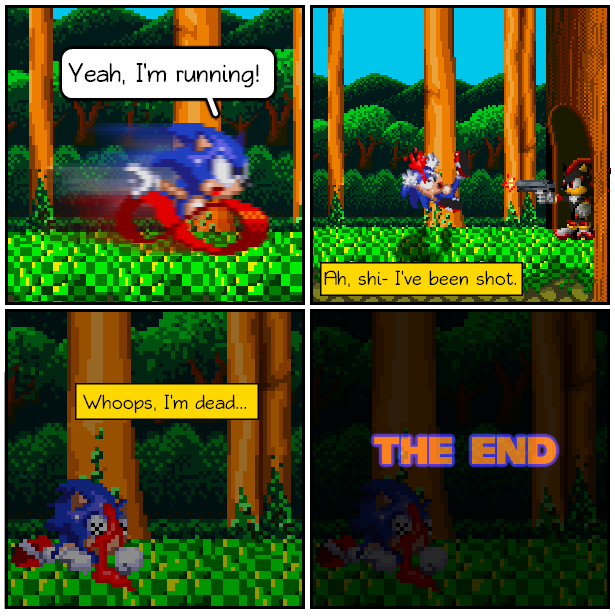 1: Faster than a speeding bullet.

EDIT: My comic “ZOOM” is gone for the moment, it may never come back. Don't ask about it.

I feel like this is a more fitting place to put this comic page.

Anyways, this comic is basically a random toned comic. Don't worry it's not going to be totally random, chaotic, unethical, and/or noobish. I'm basically making quick jokes and gags towards video games, television, anything really. With sprites of course, so this comic will probably have a lot more jokes about video games but no necessarily. Hopefully this is funny, or at least entertaining.
I'm not sure if I'm too funny of a person to base a comic totally on comedy but entertainment is a good secondary.

I'm trying to get across that this comic isn't going to be noobish and have a bunch of like fights between Sonic and Naruto or some… shit. Sorry, I'm trying not to swear. :/ Fail moment, um… anyways… This comic will probably have little to no cross breading comic pages. Like you won't see a comic with Sonic, Mario, and like Link all together unless it's about Super Smash Brothers or something.

How dare you finish my sentence before I had an equal opportunity to do myself in ten to fifteen thousand billion years you retarded Canadian. I ought to have you denounced. FOR THE MOTHER LAAAAAAND! ... I'll shut up now.