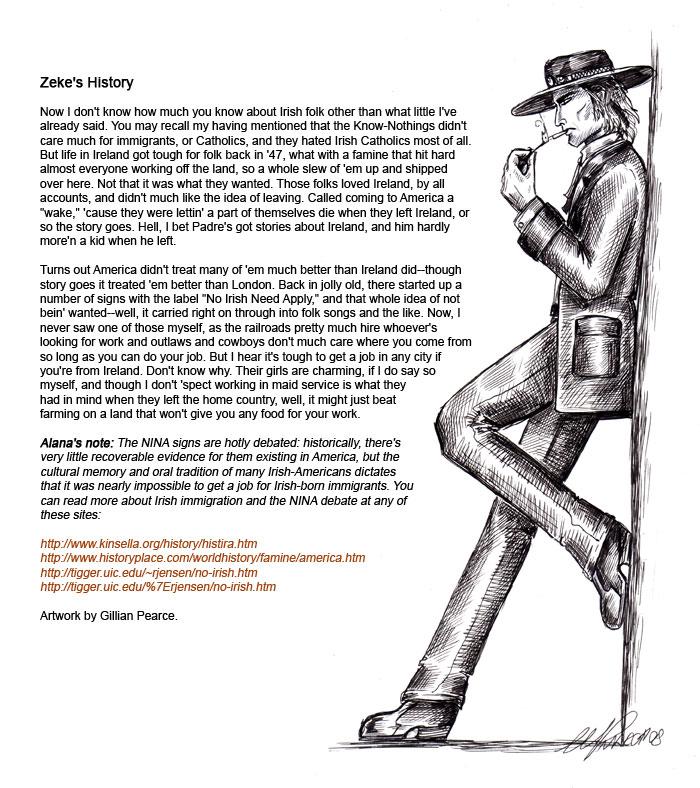 Howdy folks! Here is our next bit of history from Zeke. Again, illustrated by the talented Gillian Pearce of the Chronicles of Wyrden (http://www.drunkduck.com/The_Chronicles_of_Wyrden/).

And here are the links that Alana listed in her article -

See ya all next week!

i read this all the way when it was still updating and now they are making a film? wow thats quite a jump from a simple web based comic

Wow this jumped right into the top ten didn't it. You don't fool me marketing machines.

Hi all, Sorry I didn't address these posts earlier, but yes, it looks like the comic is on hiatus indefinitely. Which is at least as disappointing to us (the crew) as it is to the readers! However, Platinum (the parent company) is still doing just fine -- and Cowboys and Aliens is in the midst of a film production. You can see the just-released teaser trailer at www.cowboysandaliensmovie.com. Sorry that we had to stop producing the sequel, gang. It was a fun ride, and there was certainly more story to tell. -writer Alana

If anyone's wondering why there haven't been updates in 2 years, it's because the company producing this went under that long ago. Don't expect to read any more than this.

alright, ill be honest with you. these zeke reading and microrecorder entries are quite the waste of time. could you either refrain from these or putting them somewhere else?

can't wait to see what happens next!

im tired of all the reading...

Knock Knock, anyone here? Does this comic still exisit?

If this comic HAS been abandoned, then thats a shame- it was a really entertaining story and a very fascinating read! I'm giving it a five just because!

Word on the street is that this comic has been deserted. After 6 months it seems to be true...to bad, it was a great story and should havr been finished.

We're just waiting on the go ahead from Platinum to continue. Thanks for worrying about us, folks!

Well its been almost 2 1/2 months with out an update. Is everything and every body OK?

yep where did you guys disappear to?

Hey, Zeke has been up there too long. what happens next? Miss you guys.

We miss writing and drawing it! We're still waiting for word on when we'll be back regularly. You'll know as soon as we do!

When are you coming back. I miss reading the story.

That has gotta be one of my favorite pictures of Zeke, ever.

Love these tape transcriptions! From War Hawk on horses vs machine oil to Zeke on culture, they are consistently fascinating. Love it!

Excellent work again, Gillian. I think I am now jealous of Zeke's boots. I wonder where I could find a pair like that... Albone: Thanks! We strive for fascination. (Though I think Lora Innes over at "The Dreamer" probably has us beat as far as history tidbits!) MIB: Thanks! Talekyn: You're quite welcome. :) DAJB: And here I was worried you'd poke fun at us for using "jolly old..." Doc: Thanks for loaning us your artist. ;)

Another nice piece of historical background ... Keep it coming!

Thanks for the little history lesson Alana!