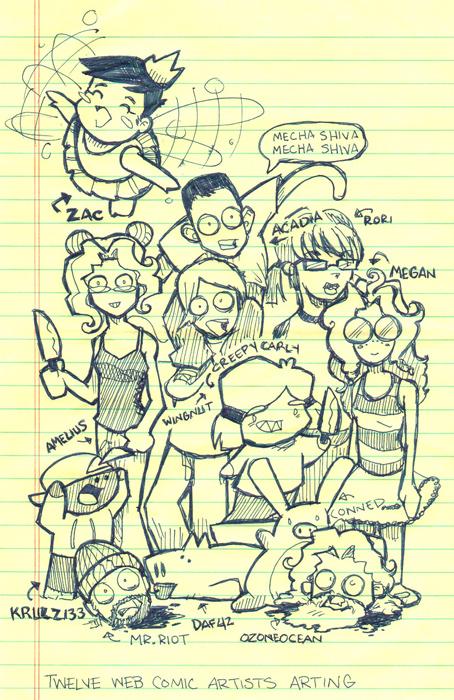 On the Twelth Day of Christmas...

YAY! I killt my favorite peoples! Merry Christmas everyone. I hope you have enjoyed the twelve days of creepy Christmas, I know I have. Please continue to post your comments and suggestions. I love to see what you have to say. I'll be heading “home” (that's Missouri) for the rest of the week, but I hope to get a couple of more updates in between now and then.
Love you guys,
Carly Mizzou

i'm guessing that's a no.

carly_mizzou: I am making a comic magazine featuring comics from the DD. I would like to know if I could feature your comic: Creepy Carly in it. It is called Comic Zone. If yes, how many issues or should I just put it in every issue. Thank you for your time.

sould make on for new years day. Love it!

bah! nice! you made amelius cute.^^

I love this comic.

Oh my GOD, A Venture Bros. Reference... As if this strip couldn't get any more awesome!

OMG thank you everyone! That's so cool! I can't believe it. BTW the Mecha Shiva is a Wizard World joke from Texas. As soon as i get it edited there should be video of the "stupidness" that was that weekend :)

You're the No. 1 read comic strip! That's awesome! Now only if the creator of Craving Control were to go die.... Hmm...

Forgot to give you a 5... You beat Craving Control!

I love it! XD look at them all

So cute I can't tell which one is the cutest.