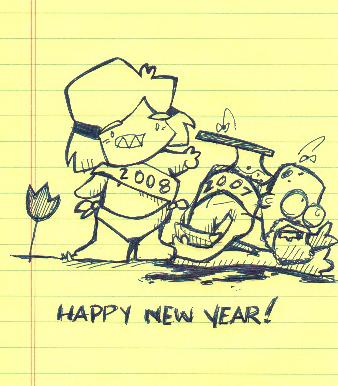 Hey y'all! I'm still outta town for a bit, but Happy New Year everyone! i'll be back later this week!

Me he he he he he he. This comic appeals to my twisted inner demons...I mean...um...this comic is evil and the work of satan...yeah...*wink* Seriously though, funny stuff.

You have no idea how much I wish I could do that to 2007! Happy New Year, freaky lady!

there is a subility to Creepy Carly's expressions! ;) Ha I see nipple! I'm glad to see everyone's ready to kick some ass in 2008.

And to you, and to your comic. Probably not to your victims though.

Doesn't she have any other facial expressions?

And THAT'S how you end the old year. (either that or do it my country's style. Fill it with firecrackers, drench it in gasoline and burn it at midnight >=D)

Father Time out, Creepy Carly in!

is that a nail file??

Not so happy for that guy! But um, yeah...come what may right? Same to you, Carly.