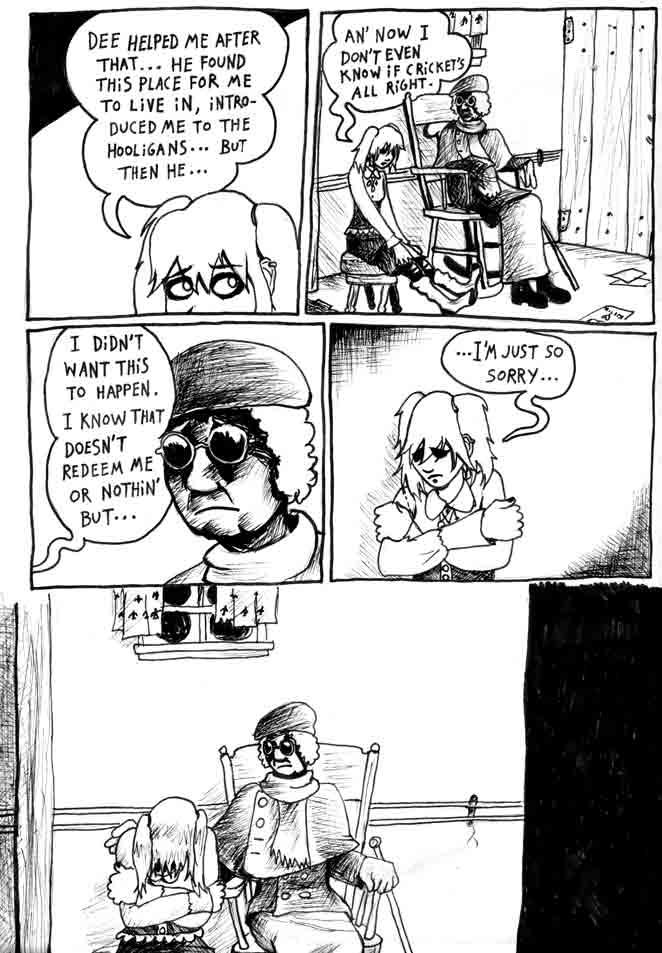 This is where Madeline's little segment ends and there's going to be a merciful drop off in angst. Sorry about be so far behind in updates, I'll just say that life sometimes gets in the way and leave it at that. Nevertheless I'm going to actually try to get my next page finished on time.
———————————
replies:
@usedbooks: Sounds like you have the same kind of luck I do. Damn. Well, I do have an interview at a video store today– here's hopin' it goes OK.
Madeline's relationship is with her dad is complicated to the point that there's sides of it that both parties don't see. Personally I imagine that Madeline's dad is more frustrated than angry, frustrated that he's such a poor provider that his daughter has to debase herself to keep the family out of poverty. Not that it makes him not a bastard, if he approached this with a clear head things might not have ended so bad.

@Peipei: I chose to leave that up to reader to decide how the dad found out. I'm not really committed to any one scenario but it seems equally likely that he walked in on Madeline with the debt-collector, the debt-collector told him, or he confronted Madeline on where she was getting the money to settle his debts. If you want to make up your own scenario I'm sure yours would be better anyway.

@Trevor: Aw yeah, I guess I didn't think of that. There's library readings for the grown-ups too right?

@Warped: Actually considering that I drew nearly 100 pages without any working knowledge in comic theory it's a wonder that I made any good pages! I gotta say, I never heard the name Yoshihiro Tatsumi until you mentioned him. I did see his “Push Man” collection though, I was mostly curious about it because it was edited by Adrien Tomine. His stuff does look pretty incredible though, especially his story about the photographer in post-bomb Hiroshima. Honestly, that dude was ahead of his time, I really ought to read more.

@amanda: Comics class is pretty intimidating at times. I'm pretty sure that I'm the only college dropout in the class, (hopefully no one will find out!)
I thought the runny makeup looked cool too.

@Jonko: Madeline has suffered more than most, everyone deals with grief differently. Madeline prefers to maintain a facade of not caring while falling apart when nobody's paying attention. She is in fact breaking down mentally a lot more than she's letting on.

I hope they find Cricket soon

Poor thing x.x I like Cricket's grandma. She's like how a grandma should be. Caring and there to listen to ones' troubles. It would probably break both of their hearts if they knew exactly what happened to Dee :(.

Ya check it out for sure! Tatsumi actually coined the term gekiga which changed the way cartooning was veiwed in Japan. If it wasn't for him and Eisner here in the west comics would still be only geared towards kids.

Aw, Granny's so understanding. I bet she was a whore too. (j/k) Good luck with the interview! Last week, I just had my first one in over a year! (I'm so pathetic that my applications never lead to interviews. -_- )

Poor Madeline. At least Gramma is there to listen and lend some sympathy.

I won't tell anyone you're a college dropout if you don't tell anyone *I* am a college dropout ^.^ I'm the least educated person at my job, and that's a little intimidating sometimes. (I'm also the only single one now that the other two single people got different jobs.) I don't get the "when are you going to get married?" stuff from my family, but I get it from the coworkers! XD

There are, but most of the people who show up are younger. Middle school and younger. That I've noticed, anyway. But it's cool, because these kids tend to have disposable income and some great ideas of their own if you do workshops. I'm developing a workshop for next year, after I have a few more books under my belt. Got a few anthologies coming out, plus I'm going to be printing some merch. Very emotional page here, by the way.

And thus the 1st emo was born. Oh, wait... I promised I would be less heartless =p Though I failed again by picturing Granny reaching out in the last panel and missing a few times before she finds Madeline to put her hand on her. I find humor in the most politically incorrect things =( On the positive though... we get to get out of the angst soon! YAY!

grandma's so nice. I guess we'll be seeing what Crickets doing next?