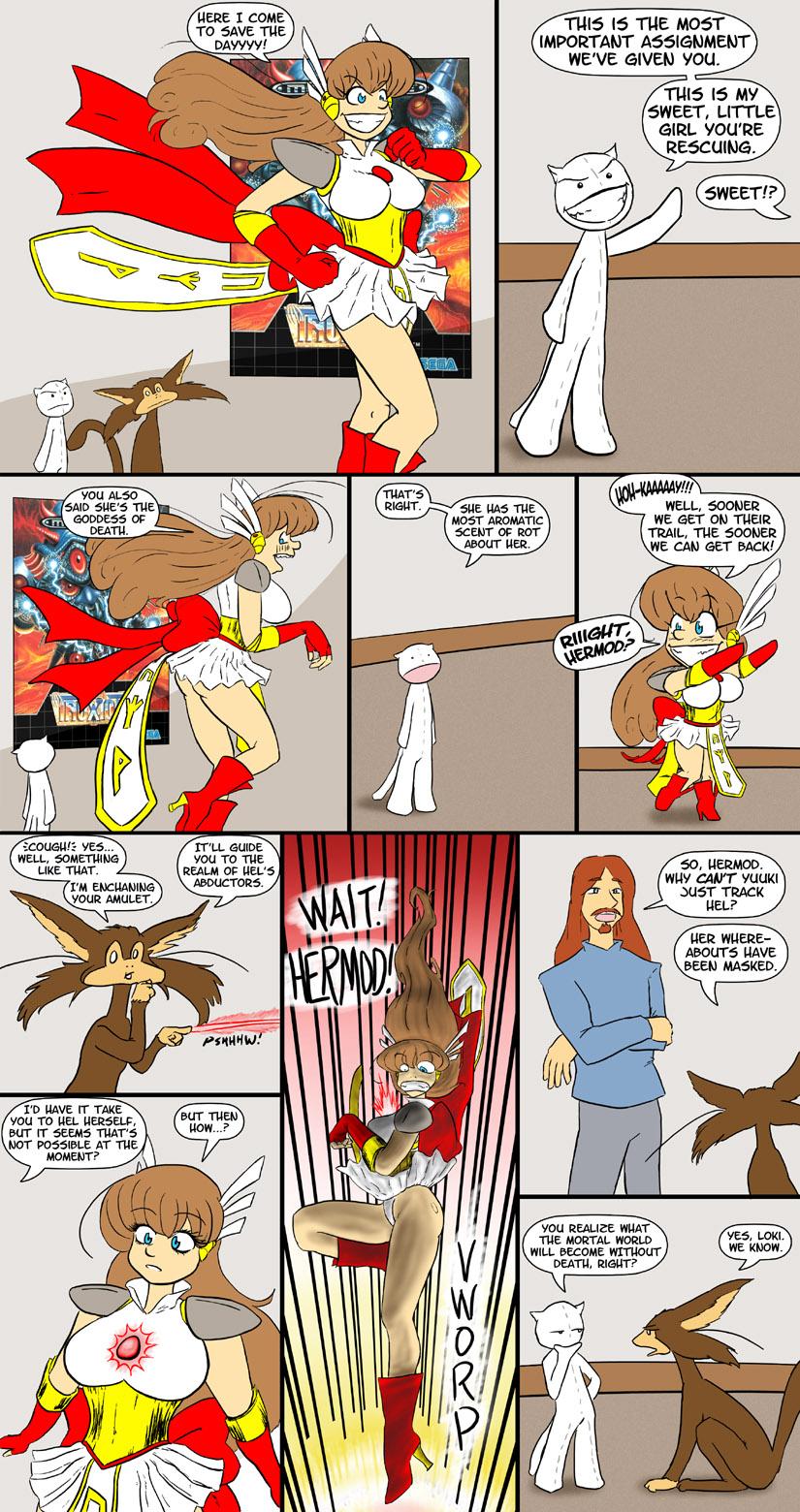 “Al had written these pages out before anyone had final character designs. The half-rotted face of Hel that many of you brought up was mentioned on this page in the draft, but it had to be changed after we got Kittyhawk's character design. So if she doesn't look like rot, she probably at least smells like it, given her lower extremities (if you can call them that).

”Oh! Why a Truxton poster? Because it's an awesome Sega Genesis game. That's why.

“That's all for me, gang. See you in another comic universe!

Next Tuesday the action shifts a little bit, as The RedDeath of BAD GUY HIGH takes over the art chores, we introduce Captain Perfect, and learn a little more about the bad guys. Plus a cameo from a totally DIFFERENT webcomic.

Did she just get her Mighty Mouse on?

So why isn't this comic (the Valkerie) on DD?

Hey, somebody's gotta be the goddess of death/

Actually, the eyebrows in the left-bottom panel are more Dasien-like than the pointed ones used by Kittyhawk ;-). But I see no reason why one can't take some freedom regarding small details, if it makes drawing another character easier. The round nose works for me, I think Neil did a good job depicting Yuuki.

Bill Martin - there's also overpopulation problem, dead ones coming back to life, and occasional Elder Gods if you're Dan Abnett.

[quote=Zephyrion]What about all the other death gods?[/quote]You're gonna want to tune in next week. [quote=Zolem]Ok, the other characters look great, but Yuki....the face is just off. I know she's not your charecter, but a round nose seems...off. A simple little triangle bit would have looked better, or even just a bridge line.[/quote]But Yuuki's nose IS round. I know this, because my characters typically have triangle noses, and one of the first corrections I had to make on my version of Yuuki was her nose. It might be a little more bulbous, but it's closer to Kittyhawk's design than any version of her that I drew in Crossoverlord (and Yuuki showed up a lot). If there's one thing about Yuuki's face that's off, it's her eyes. They're actually bigger and extend down the face farther than what you're probably used to seeing in the Valkyrie Yuuki series. That little artifact of my style kept creeping into these pages unconsciously. You'll see that the last two drawings of Yuuki on this page are a bit more under control. I also draw longer faces than Kittyhawk.

God of War, yeah, imagine people who've been run over by trains, hacked to pieces by heavy machinery, crushed by steamrollers, etc. not dying, just being in extreme pain. Death is a release from the torment, that's why immortality isn't a blessing but a curse.

Ok, the other characters look great, but Yuki....the face is just off. I know she's not your charecter, but a round nose seems...off. A simple little triangle bit would have looked better, or even just a bridge line. The round nose...just makes it look a bit parody like. I dont know, it just doesn't sit right with me.

Couldn't resist getting a panty shot in eh, Neil? ;)

One Valkyrie dropping in! :)

Assuming Marvel is doing two separate comics about how world without death would be a bad thing, nerd like me can assume it's not gonna be a Disneyland, right?

you can give hel some perfume or car arome pine tree and everyone will be happy,

I can see a LOT of Neil in this page. Which is not a bad thing.

What about all the other death gods?

In respose to Loki's question, I will play this: *Plays In the Land of the Dead*