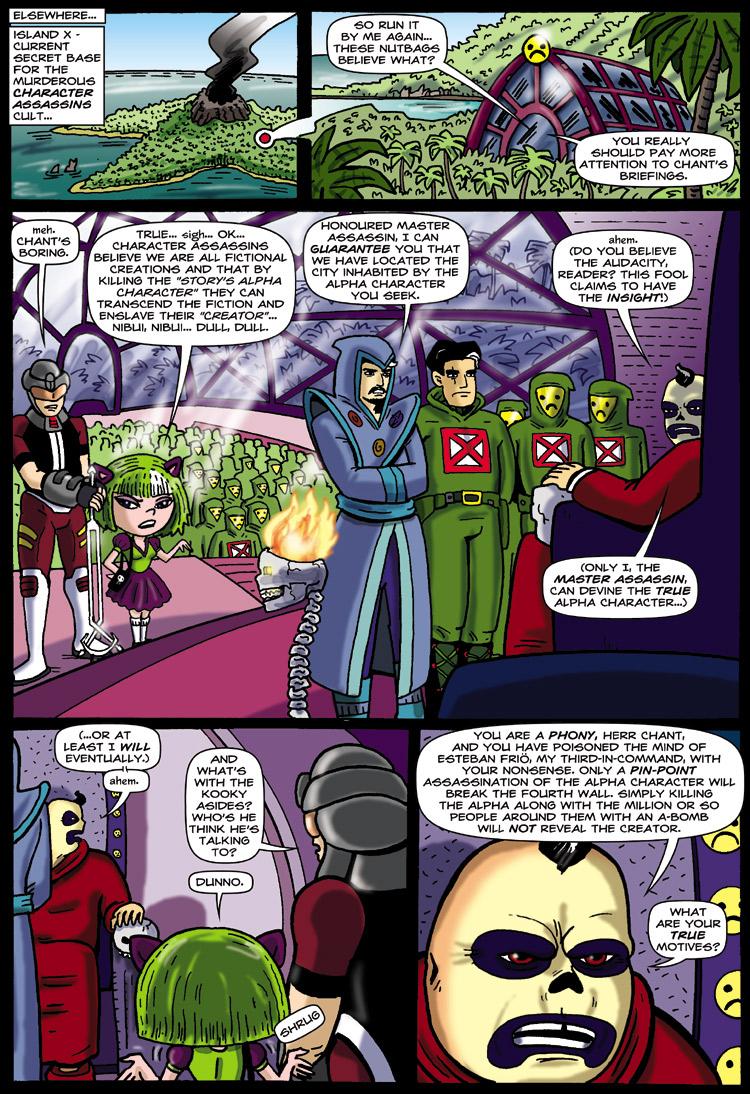 There were five updates last week so make sure you go back five pages to catch them all.

Here's a double dose of your bad guy quota for today! Not only do we have four members of the Doppelganger Gang but also the Master Assassin and a whole swarm of Character Assassins. This is actually the first time the Assassins have been seen in the flesh - their previous appearances have been as (SPOILER ALERT…!) illusions - here and here - or as training robots in the Robomat - here. It's also the debut appearance of the cult's leader known as the Master Assassin… more on this guy tomorrow. As for the ‘Gangers - this is the first appearance for Kid Apocalypse (designed by Bad Guy High’s the Red Death); the second appearance for Syko Suki (one of my creations), her debut was in this earlier scene; Chant (designed by Mindmistress' Al Schroeder) was previously seen in the shadows here, and; a debut by Esteban Frío (also one of mine).

There are two more updates this week - Thursday and Friday… see you tomorrow as negotiations go pear-shaped!

Apologies for the down time folks (not that it was our fault, but y'know, sorry). It's thrown our update schedule out of whack but providing DD stays on its feet and doesn't fall into a big drooling mess we plan to have the next page up Thursday and then Friday this week and Monday thru Friday next week. Thanks for reading, commenting and rating us!

Who's been gnawing at the 4th wall??

how does he talk in parenthasis?

At least it only took them one try this time.

drunk duck is falling again, why did it has to move again nobody knows,,,,

and since im sure you guys are veterans, how long until drunk duck finally pulls itself out of its stupor and begins to act the way it should?

Nice way of getting the info on the CA's forth to the readers incomic :-)

The masks worn by the Character Assassins are a small riff of the :) and :( drama masks of old days - except of course they all get the :( !

what is kid apocolypse holding? also, cmon guys, turn those frowns upside down.

Crossoverkill.com, is what Neil is referring to. ---Al

Also, ignore my lack of proofreading. I just woke up.

Oh, and by the way, folks, due to Drunk Duck's server move over the very extended federal holiday weekend, the updates on the Comic Genesis mirror is staggered one day in advance, you if you want to take a peek at tomorrow's page, just click on over. This will right itself next week, when the pages realign.

Suki cracks me up throughout this entire sequences, with her adorable big-headed brattiness.

Character Assassins! Real ones! (You have no idea how long I've wanted to say that!)