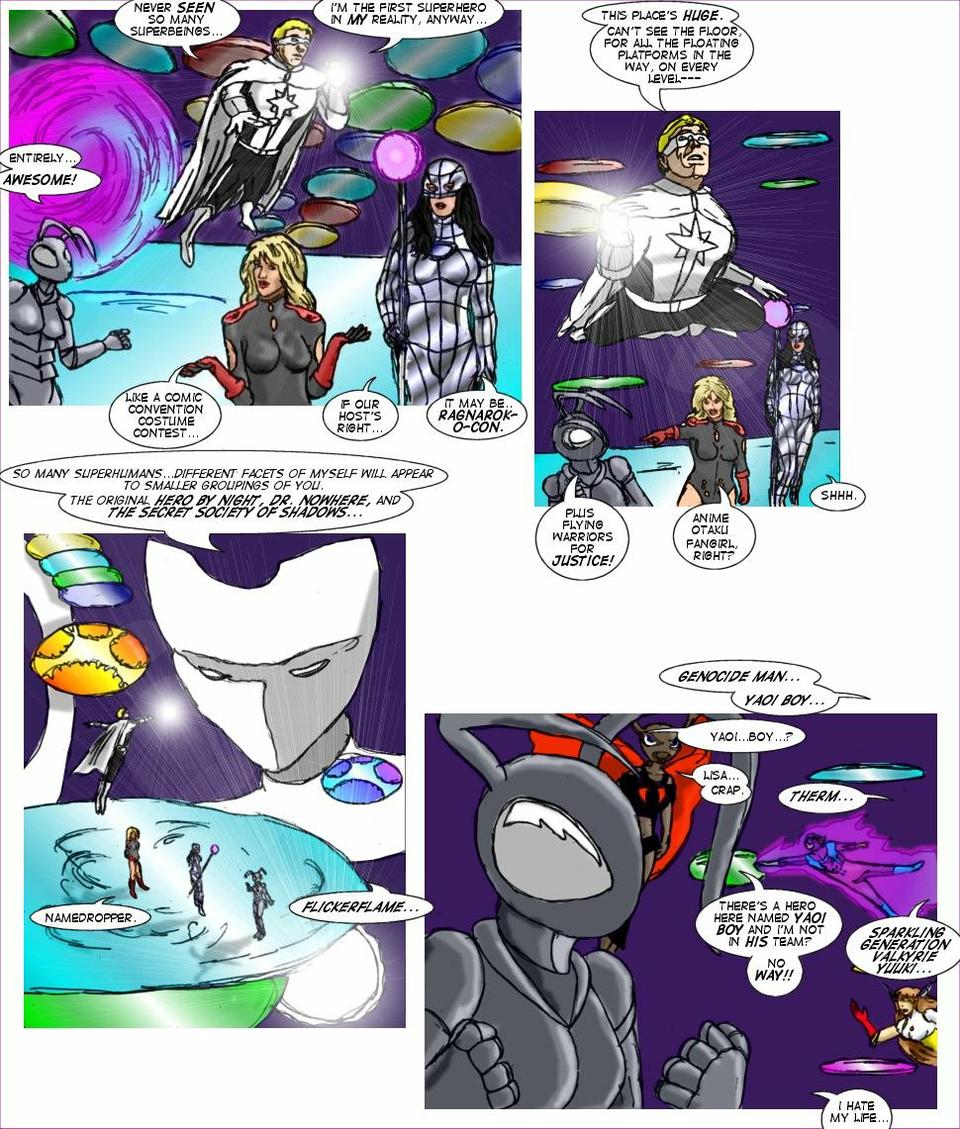 The original HERO BY NIGHT (David Day), the trans-dimensional group of mystics that he joined called The Secret Society of Shadows, including the mysterious Dr. Nowhere, are all created by D.J. Coffman, and used with his permission. It's only natural that the Secret Society of Shadows would be called during this, since their very function is to wander the realities, guarding them from mystical threats. And time is variable across different realities—hey, haven't you ever read the Narnia books? (Which means, no matter how long this story takes, our heroes can return very close to the time they left.) Which is why it's the original Hero from the forties/fifties.

FLICKERFLAME is my other webcomic, besides MM. Flicker's a con man and the anti-hero's anti-hero—the only thing heroic about him is that he's trying to betray the evil group he joined—and their mysterious host has a special reason for summoning him, which I'll eventually tell in Flicker's own comic. (Flicker does NOT live in MM's reality.)

Yaoi Boy is our own creation (specifically, Remus', I believe) and you just MIGHT hear of/see him again.

Therm is a superhero from SPECIAL SCHOOL, the often-hilarious story of a school for government sanctioned superheroes in upstate New York, and used with the permission of Andy Mason, Special School's creator. You can find out more about Therm (under “Julian ‘Coach’ Harper”) at the cast page.

SPARKLING GENERATION VALKYRIE YUUKI is of course, the delightful tale of a boy who is a big fan of “magical girl” manga/anime (very similar to A.N.T.) …until he gets transformed into one. A Valkyrie, to be precise. Yuuki is used with the permission of Kittyhawk, Yuuki's creator.

Of course, there are many other heroes here in this Gathering, and we'll get around to mentioning them over the course of this story. Their host is simultaneously appearing and talking to a lot of the groups, all of whom will have their own assignment.

And yeah, it's a bit of a homage to the initial gathering of heroes in CRISIS OF INFINITE EARTHS…somehow, it's hard to make a trans-dimensional gathering of heroes without being reminded of Wolfman and Perez' excellent, pivotal series…but as you'll see, we'll have our own spin on it. I mean…Yaoi Boy wasn't invited to THAT gathering….

Neil's encountered some sort of delay, but we're hoping to have the next page up later this morning. Watch this space.

YAOI-BOY! With the power to cause nosebleeds! 100% win.

Yaoi Boy? Oh my, Io is going to have a heart attack if this keeps up. And good to see Yuuki make a cameo. Another of my must-read webcomics.

I have this odd feeling that Yaoi Boy will outlive us all...

Yaoi Boy! That's hilarious! I'm loving this series! If my scanner wasn't busted, I'd be cranking out fanart right now!

Al, you're a big tease. :P Just you wait, I got something cooked up, I never mentioned the Dimensional Trail, that will be featured eventually, probably in chapter 4 or 5. BTW thanks for the new anime read, Sparkling Generation Valkyrie Yuuki, it was a fun and interesting read.

Xade, Invisicat is right there, in front of the three heroines in the second panel, right below Lightbringer. Wait, you can't see her? Could it be...because... She's INVISIBLE! (Couldn't resist.)

I emailed DJ specifically about that particular subject a week or so ago, asking him if we should delete the mention altogether, refer to it obliquely, use it as is, etc. He assured me it would be all right to run it as is, despite the legal complications he's having with Platinum. (And it was approved long before the legal matters were brought up.) I'm taking him at his word on that. Hero by Night has appeared as cameos in other strips (Warmage for instance), and that mention hasn't been taken down either.

Hate to be a busy body but... The Secret Society of Shadows...I know DJ created them but aren't all the HBN concepts and characters owned lock stock and barrel by Platinum Studios? It may be their permission you need to seek now that DJ has been booted from the property. Anyway, love the Crossoverlord story so far.

I'm just glad i might possibly be mentioned. Course, Alex himself is more superheroish, but you guys havent seen what he can do properly trained up...

And there will be others appearing who haven't been mentioned ...yet. This is just a small sampling. (Some of the rotating "links of justice" just may give you a clue---but not all of them.)

There will be more than name-dropping later on, and some of these heroes WILL get one-screen cameos. So, don't think your job is done just yet, Mr. Hogan.

Xade: They probably have at some point, just to annoy me... well, despite the work it provided, I love this namedropping, and again ANT runs with the best reactions :P

interesting,m I wonder if you chose one of my characters, Invisicat is a superhero who becomes invisible, but has the martial arts to make her more than a decent threat.

Oh yeah. We're not going to let comedy gold like Yaoi Boy get away from us[i] that [/i]easily.