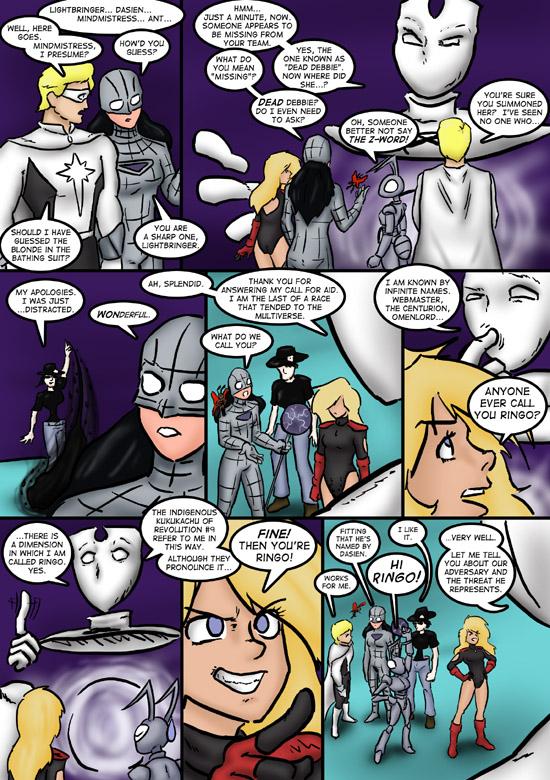 I love awesome victory poses! Obviously, I was drawing upon my Adam Warren fanboy love for that one.

And speaking of which, Dasien's face in panel seven is the most Adam-Warren-iest faces I've drawn in a long time! I love giving Das mischievous facial expressions. C'mon, Mr. Floaty Head! Get to the point!

As a gatherer character, this “Ringo” is far less omniscient and omnipotent as you might expect. In fact, we decided early on that he'd be rather goofy and awkward, often over-explaining things and nattering on about this and that. He doesn't even seem to realize that Dead Debbie had wandered off until it came time for role call. Giving him silly facial expressions was one of the joys of doing this page.

yes, he could be a Star!

So then this character, being the last of his kind, is forced to guard the multiverse when if he were not the last of his kind a less awkward, more all-together of his species would do this and not allow him? Ah, that's how I make sense of this anyway, lol.

Well, when you're busy handling the multiverse, you're gonna be a little distracted, right? You can't keep track of EVERYONE....

Seems fitting that he is named after one of the 4 Great Ones :P

Somehow, I'd have expected the inhabitants of a dimension called Revolution No.9 to call him Paul ...

I totally love your art Neil. It's perfect.

Ringo is a perfect name for him, he manages the "rings" of the multiverse. And the personality quirks are awesome! Here I thought he would be some intergalactic jerk, Ringo is for want of better words "cool!"

I forgot to mention that William Adams of Pillars Of Faith had done a lot of conceptual art for the series. Some of his art was used to template a couple of the panels on this page. Eventually, we'll be releasing some of the preliminary art, and you'll see exactly which parts of this page came from Adams' work.

Yeah, Ringo is going to be kind of like Merlin in SWORD AND THE STONE...extremely powerful, pretty knowleable, but a bit absent-minded and not the most organized cosmic entity you've ever seen...with just a hint of Manga Khan-ish over-monologue-itis. Love the facial expressions, Neil, on his masklike "face".

I always get a kick out of seeing my characters drawn by others, as I love it here. Admittedly, when I did create Ringo, I had him as the omniscient type, but things evolved from there. Also, we originally were going to call him "Bob" (though I kept lobbying for "Webmaster"), but then this really, REALLY bad weekly comic from DC called "Countdown" came out, featuring a character in a similar position as Ringo's and named Bob. Not wanting to remind anyone of that travesty, we picked this new one.