Daisy and Moira and Roy 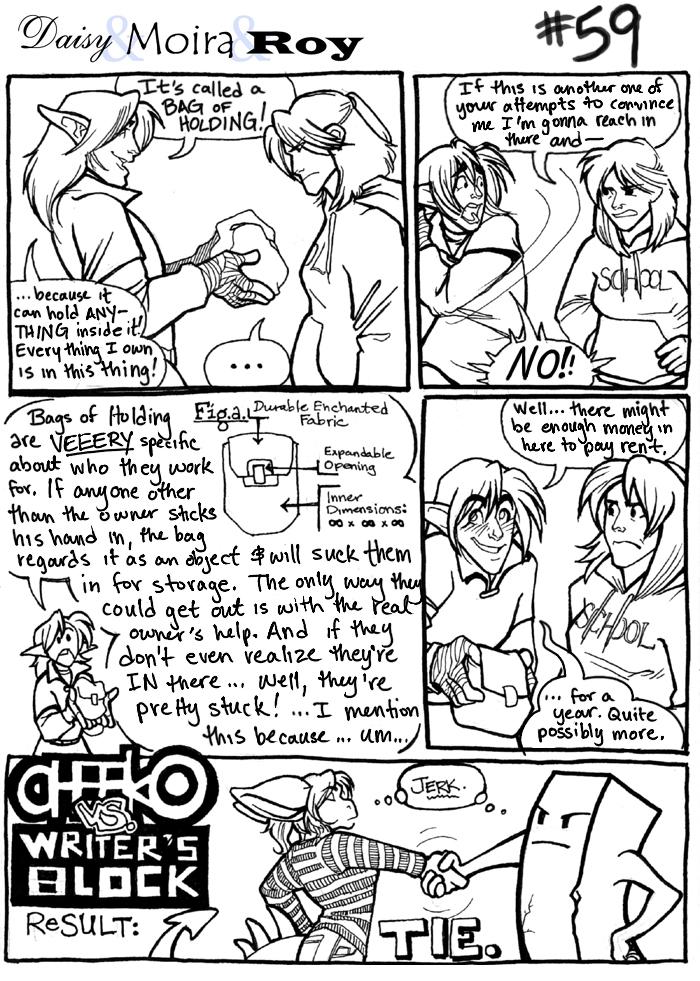 Originally, I had no script planned for this page. I couldn't figure out what the heck was going to be said, so I planned a comic completely devoid of dialogue. All the speech bubbles would have been empty and I would have told you to make your own script. All the expressions were random and I had no idea how I would even string them together even if I did have a script ready.
BUT GUESS WHAT.
I figured it out as I was INKING. Ha HA! Take that, Block Head.

I still get some good laughs out of this comic whenever I rediscover it. :)

I agree with EggNog: it would be so greeeaaat if you continued the comic! But maybe you don't like us anymore? :/

Its so funny! I wish you would continue it through.

Hi Cheeko. I've just read the whole comic from page 1 to 59. You have real talent, both in drawing and in the text. It is full of humour and I love your self-portraits. So am very sad to see that it has come to an end. I was also sad to see some of the obnoxious comments but cheered to see those messages supporting you. Thank you for bringing some enjoyment into y life. I will bookmark the site, just in case .... With best wishes, Chris.

Well now, it's been over a year since the last update. Writer's block, RL, or combination thereof?

Wow, I love this comic, I'm definitely going to wait patiently for the next update^^ Excellent work and I truly enjoyed reading it:D

Wait, what? So why did he need the sword as collateral? Is it not actually *his* Bag of Holding?

Hooray for DaMaR making a comeback. I might even draw some fanart to celebrate. ... No promises though. I'm already have a boatload of projects to do.

The first update of this since I joined Drunkduck. Oh, and hello. I like how the bag of holding works. Is his money in gold or what?

I got owned by a writers block.