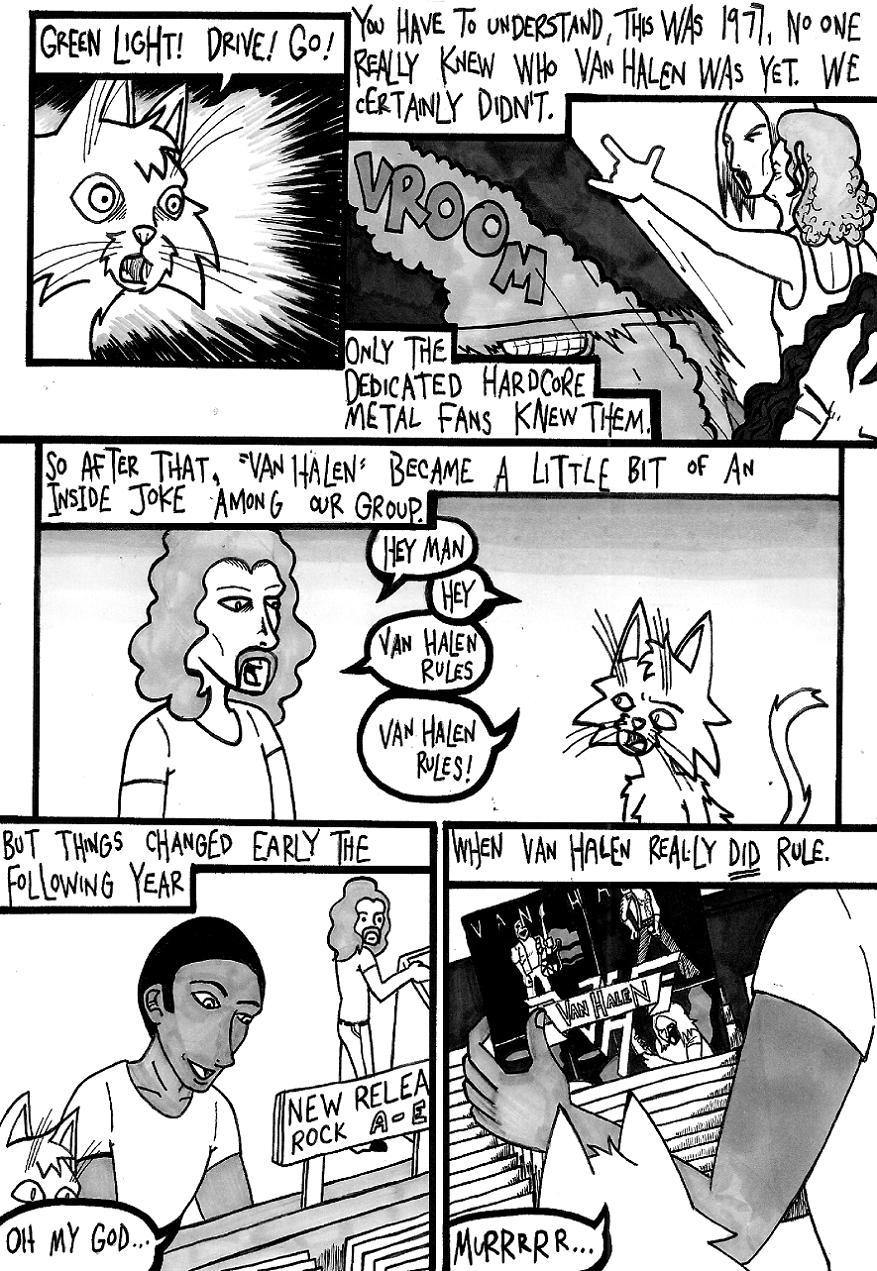 I showed this page off to a friend of mine.
She had already seen the page I had done where I did the Iron Butterfly cover, and had already commented on how good at looked. Her reaction to this one was “Wow, you should get a job designing album covers!”
Normally, I'd be flattered, because hey, album covers are awesome. But then after a few seconds of thinking, I said to myself “wait a second, all I've done is mimic album covers that have existed for years, decades even. Where on Earth can I get myself a job mimicking album covers? Seriously honey, I love ya to death, but that's just silly, you're silly.”
Okay, well enough of my condescension, welcome to page 30!
I need to get working, it's goddamn September 7th! A.P.E. is a month and a week away, and this book isn't done yet. I have Page 31 and 32 nearly finished, I HAVE the cover, but not formatted properly, but no back cover. I also need to write my dedications. While I was writing this book, two of the people whom characters are based on actually died :(
Willy DeVille as you know passed on last year, leaving his band Mink DeVille lead singer-less. What I learned this week is that Malibruce, the long haired dude with the handlebars and the badass ride suffered a heart attack! This was relayed to me by my friend Steve, for whom Dave is based on. He got the call from Bruce's sister whom he hadn't heard from in years. They way he tells the story is that as soon as he heard her voice over the line, he knew something was wrong. Because according to him, as you get older, the longer periods of time you go without hearing from someone, the worse the news is gonna be. She wasn't gonna call him up and catch up, she wasn't gonna call him up and invite him to their 50th high school reunion back in New York, no, that's not how these things work. You haven't heard from someone in forever, you get a call, it means someone's dead. Sad, but true.
We can take some solace however, in knowing that Bruce died as he lived, doing what he loved doing, keeping rock and roll alive. According to Steve and other reliable sources, Malibruce was a party animal till the day he died. To me, that is a good way to die. I'm sorry he died, obviously, but I'm glad it wasn't cancer, or a drug overdose, or a shot liver or any other kind of shitty slow death that exists today. He literally partied until he he couldn't party anymore. He was like Slurms McKenzie from Futurama, except he wasn't being held hostage by an evil galactic corporation.
A good way to go.
So let's give a moment of silence to mourn Malibruce's passing, him and his stories live on in comics.

Respects to those affected. RIP Malibruce.