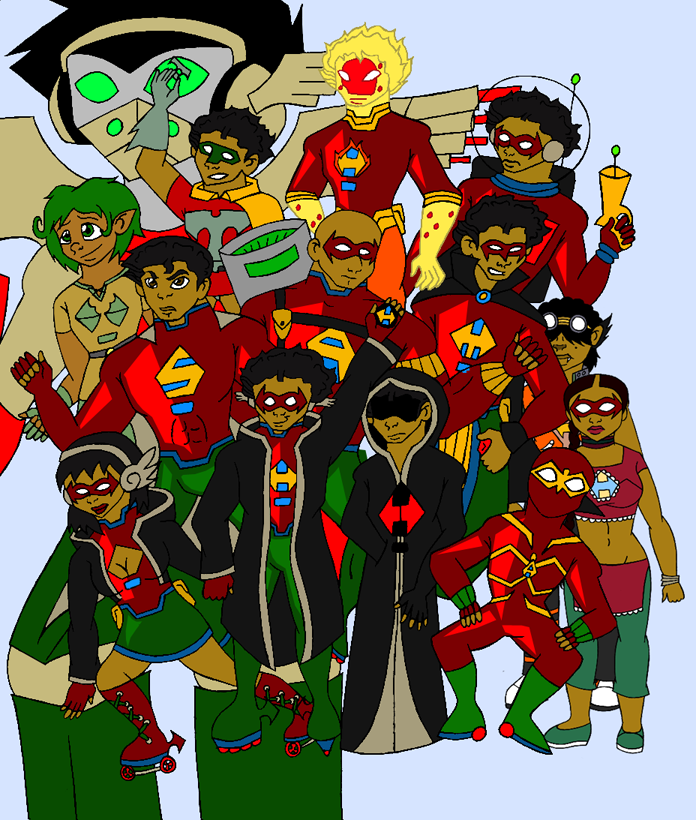 All the parallel versions of Hero I made up for that comic. From Right to Left/Bottom to Top
-Hira-
Appears to be some manner of Bollywood Director, she has the power to
compress her mass, effectively shrinking herself while still maintaining
the weight and force of an adult. When she's small, she turns into a
crystalline “diamond” form.
-Anansi- The Alpha Hero. He has amazing
spider strength, agility, durability and can stick to walls. He also
seems to be aware of all other realities or “stories” and can manipulate
them to an extent.
-Horror- He can telepathically read the fears and desires of others and change into those.
-Hero-
Our Hero. He was initially just well trained and smart with a
proclivity towards fencing. Now he can summon the forms and powers of
parallel versions of himself.
-Hera- Amazon Hero from a world without
men. Has superhuman strength, durability and reflexes, but also is
trained to be a superior warrior and is skilled in a variety of weapons
and martial disciplines. Is functionally immortal and a lot older than
she looks.
-Heron
- We know this guy. Crazy Space Cat Monster. Can change into a bigger
Crazy Space Cat Monster that has super speed. Is not that slow in his
regular form too. Also, a really good thief.
-Magi- Master of clerical magic. Very ill defined power-set.
-Anti-Hero-
90's Reboot style Hero. He is ridiculously muscular and strong with
tiny calves and a lot of pouches. Like Hero initially, he's a self made
man. But, he prefers enormous weapons that shoot to swords.
-Superhero-
More Generic Hero. Flight, Invulnerability, Strength, Speed. Also, has
some weird electric powers because all black superheroes have electric
powers.
-Star-Hero- Flash Gordon style everyman with laser blaster and a space suit.
-Hot-Blood- Can manipulate fire for offensive and sensory purposes.
-Tech- Younger, underpowered version of Hero. Superhuman bad fashion sense.
-Robin Shepherd - This guy is familiar too. Controls plants, charms animals, makes people question their attraction.
-King
Herobo- Giant Hero themed robot. Assuredly has some manner of operator
which resembles Hero. Shoots a lot of stuff, has giant weaponized guitar
to kabong people with. Falcon Zord Wing Guns.