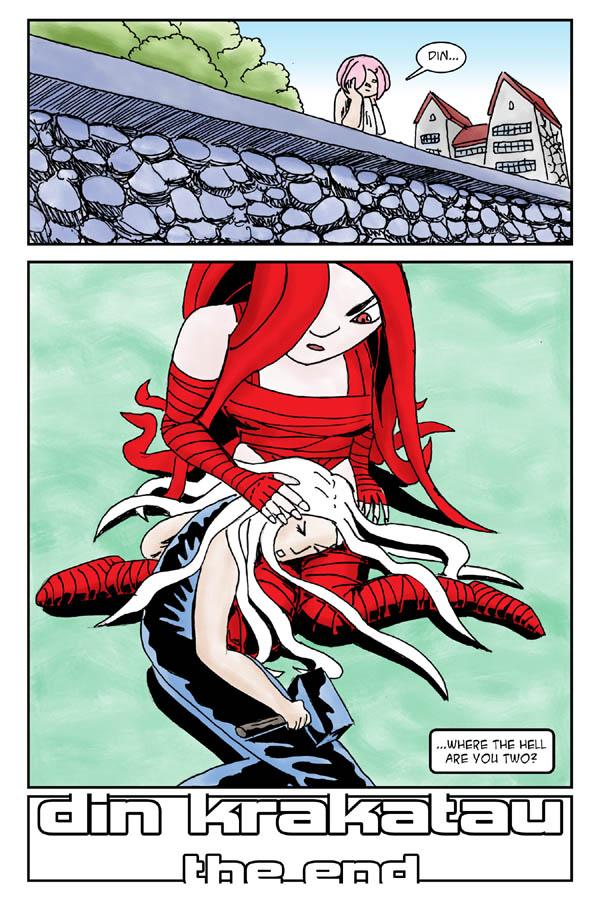 When I started Din Krakatau, it had no script, no title, no actual characters, nothing. It was just this goal to write and draw a comic to learn how to do them properly, and all I had was this guy standing on the hill, looking towards the town. That was it.

Quickly, the moment he entered his parent's store, a brief storyline emerged. Family trouble, monsters, magical weapons, supporting characters, bad guys, gaps in memory… all that stuff started to emerge, one after the other, until, near the end of chapter 1 I had a basic idea where I want to go with this.

After Sara's introduction, I knew that it'll be tied into another of my projects, one that sits in form of several stories, unfinished scripts, loose plotlines and character ideas. At the end of chapter two I sat down and wrote the entire second half of the story, trying to wrap it up as best as I could. This is the result.

So, Din Krakatau will return under a new title, Amen City Chronicles.

Amen City chronicles will be a series of interwoven graphic novels (serialized as webcomics and hopefully collected through print-on-demand) revolving around the city that was mentioned in the story couple of times and around its surroundings. I'll most likely restart Din Krakatau in b&w, after whenever I am done with preparing that version, and as it'll be running, I'll focus on drawing the second volume. This is still couple of months away from happening (and as I write this I am still working out the chronology of stories and their internal ties to each other), but here's hoping for the best.

For now, this is all I can say. Before that I'll probably do a shorter, unrelated story that's been sitting as a finished script for about a year now. I'll announce it both on the drunkduck forums (at least in a form of a signature banner) and on my blog http://noisefetish.wordpress.com/ whenever it'll be ready to go live.

That's it for now…

Time for the big farewell speech.

I'd like to thank everyone who has read or commented. Also, to my “proofreader” for the print edition and to all the friends who basically cheered for me throughout the entire time.

Big thanks to Dwight L. MacPherson, whose Surreal Adventures of Edgar Alan Poo gave me the idea of starting a webcomic of my own, and for suggesting Drunk Duck as a potential host (the ease of uploading certainly helped me to get this thing rolling.

Also thanks to Shadowline for their “How To Create a Super-heroine” contest, in which I obviously failed, heh. But that failure made me stop searching for artist and focus on improving my own art skills, leading directly to the creation of Din Krakatau.

Also, to anyone who I have forgotten (or simply didn't mention by name).

Thanks, stay tuned for more :D


So, the future of this thing… well, I'll probably reupload everything under a new comic name once I have already started on volume two, most likely going 5 pages a week. Right now I have a script or two to get out of the way. Now that I have more control over my art style, I should be able to finally do them right and they've been sitting in my files for quite a while.

After that? Volume 2, volume 3 etc. Future volumes will be most likely all b&w or greyscale, since it'll allow me to tell the story at a greater pace and won't force me to charge people a small fortune for each volume.

It took me 11 months to present this entire story, but you could say this book is a year old, as I started writing and drawing early February 2008 and we're finishing it early February 2009.
So, in a way this is a one year anniversary (or close enough), the final wrap up AND few pages after the 125th milestone. Neat :D

PRINT EDITION: right now I'm finalizing the inner book design and waiting for a new card from my bank (without it I can't use Paypal), once both are cleared, I'll attempt to send the files to ka-blam. We'll see how long that takes, hopefully not TOO long. I'd love a late march release. Once the color version is done, I'll do the same for the b&w one, hopefully selling few more this way.

So, thanks for reading, see you sooner or later when I (hopefully) announce the print versions being out and later, when I restart the book.

Thanks, both of you. Nothing new happened on the print front yet (but I'm few steps closer) so if nothing goes wrong, I should have an announcement to make n April.

this looks cool, I'll fave & come back later. :D congrats on your printing!! :)

Awesome job I may have to order a print edition!