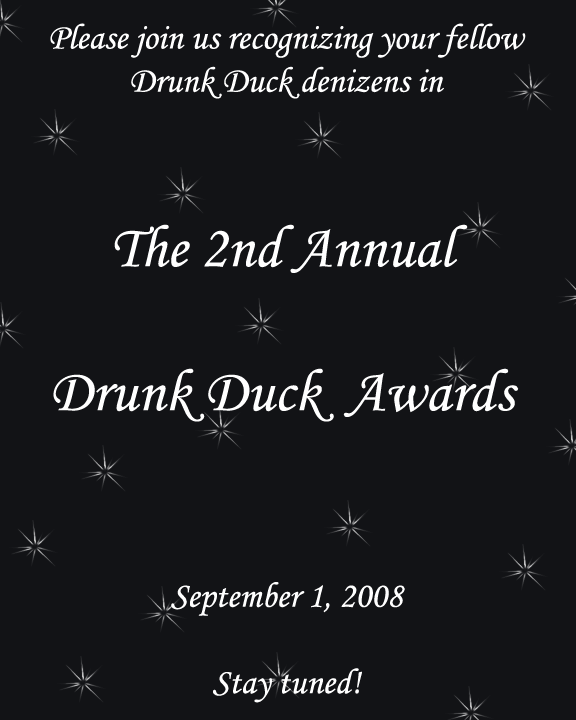 This is your official invitation…but it's also a way for me to test the layouts! So…things might be changing around a bit and looking dumb. I apologize in advance!

Great JOB Amanda!!!!! These were really good! I hope I have time to do a presentation next year!!!!!

Amanda, I have to say it. This year's presentation of the 2008 DD Awards deserves its own award for overall look and performance! I agree with some of the others that other awards ceremonies don't seem nearly as entertaining as this one by comparison. Thanks for taking me on board as one of the judges, and I hope to see some new faces winning awards here next year!!!!!

THIS WAS FOR A COMIC TYPE DEAL

This is gonna be great. I'll get my best blue suit.

I never got the format before. It's cool. I hope I can present next year!!

LOL i find this almighty cute and fun kudos to u guys !

Well, it SAYS there's a new page today. There isn't. But there will be in a couple hours!

i'm pretty excited. not too far off now!

I'm looking forward to this.

Looks good!! Are we gonna see a Barbra Walters special before the show??

Amanda, if you think his singing is bad, and it is, you should see him try to show his horses he has raised for him on his Horse Farm here in KY. He is as much a horseman as he is a singer and actor.

Totally cool, DragonRider! And UsedBooks, every time I think about Shatner singing...I think of his rousing rendition of "Mr. Tambourine Man." Cracks me up.

That's great, dragonrider! We need some music for that, and then we can have Shatner "sing" it. XD

Wow! Color me impressed, beautiful! With the Drunken Duck We do agree, Ã¢â¬ËTis time again For an Award spree. The Best of the Best We seek out here They all shine out, But do not fear WeÃ¢â¬â ¢ll fairly judge all And then compare Our thoughts and notes From here to there These comics named here Are beyond a doubt The best weÃ¢â¬â ¢ve seen To this we shout WeÃ¢â¬â ¢ll give an award So all may know They are the Best Of the Drunk DuckÃ¢â¬â ¢s show.