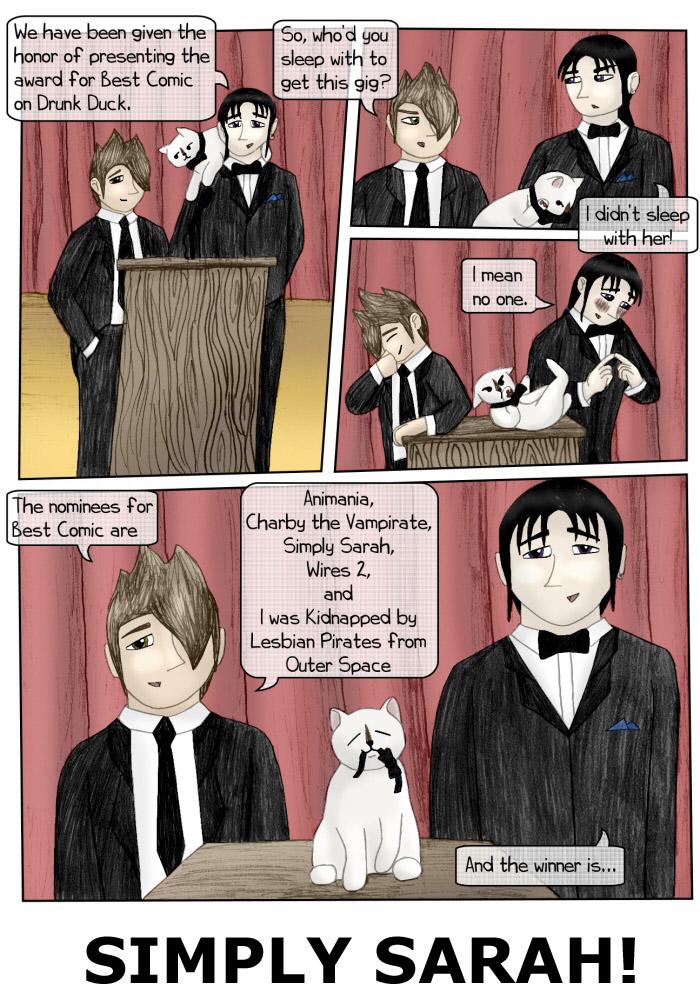 This presentation was prepared by UsedBooks!

This was the first presentation where I got to the winner and said "YEAH!!!" I'm very happy for them. It's a good comic and deserves the win, even against such strong competition. And I can't forget to mention that this was a great presentation, Vickie!

I love the kitty. :) Especially the proud look on its face for slaying the evil neckwear. Great job, Vickie! And of course, great job Simply Sarah!

I am not surprised at all simply Sarah is well in a way and by far the best comic on DD and her fans prove that,I never thought a chick strip would be my fave too.And I mean that in the most non sexist way!

Oh wow, nicely done! Simply Sarah is a pretty sweet comic, but now we can say that it's the best!

Yay for SS! This was a cool pressy, too!!

That brings a whole new level to the "I'm not touching you" game. *taunting voice* "I'm not within 300 yards of you."

In my defense, Tristan is totally cute ^.^

Hooray! Simply Sarah is one of the few comics I simply [i]have[/i] to see as soon as it updates! Congratulations Sky on a thoroughly deserved win! Oh, and who [i]did[/i] he sleep with? I only ask because that cat is looking very sheepish! ;-)

A tough call, but a good choice!

Congrats! All excellent comics! (Which is why they grace our front page so often. :-) )

Way to go sky! a tough panel between les pirates, simply sarah and charby @-@ So double congrats for SS! And it's interesting that three of them are gay comics xP

GO SIMPLY SARAH! I can't say that I'm not completely not sad that I didn't win! I mean I knew I wouldn't but I still had hope! Honestly I thought that L.S.P.f.O.S. would win! O: But I guess not! But I totally love Simply Sarah too! Cause I'm also good friends with SkyAnglel, she deserves it! Maybe I'll do better next year! It was an honor to get nominated!