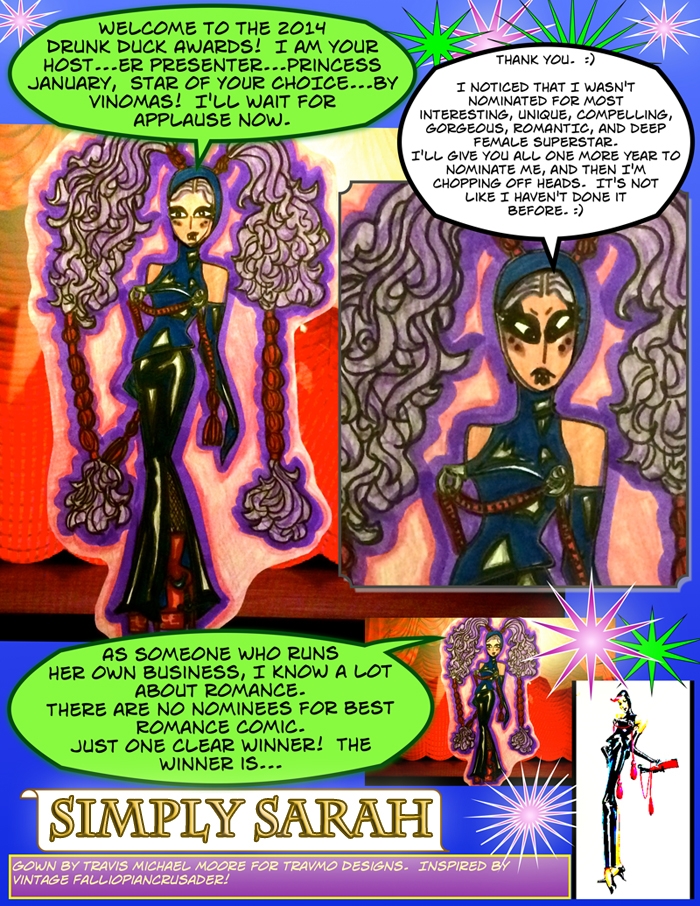 Best Romance in a Comic presented by VinoMas

This presentation was made by VinoMas.

As stated during the announcement of the nominees, there was only one comic that received more than one vote to secure a nomination for Best Romance in a Comic. So by unanimous vote, I award this award to Simply Sarah

And those comics (9 btw) will get proper credit in the ultimate list of nominees.

@skyangel: "As stated during the announcement of the nominees, there was only one comic that received more than one vote" -- SS got MORE than one vote. Other comics got a single vote, and possibly too many to warrant a tie-breaker.

Congrats to Simply Sarah! ... I'll be off to Alpha Centauri now. Only got 1 year to get as much distance between me and Princess J.

@VinoMas I'm sorry, I'm already Vlad's manager and you know how possessive teenager vampires can be.

Umm well many thanks to that person who took a few minutes to nominate us. Would that wonderful person like to stand up and accept a grateful hug? XD Really though I'm kind of shocked. We do our best on here just as so many other thousands of comic makers do and statistically there must be at least a couple of hundred good romance comics on here that never got a chance so I can only assume that like me the majority didn't even know the awards were under way until it was too late. Each year I tell myself to be more vigilant and keep an eye out for that little awards avatar but still I seem to keep missing it!lol As always though, much respect to those who run these awards and put in so much work to make it an enjoyable event. Hopefully now that the whole site has been handed to the very people who care the most about comics and comic making, next year will be a really great social event.

Congrats to Simply Sarah! A perfect choice! @kawaiidaigakusai - Wow, what an amazing compliment. I loved working on that quack cast and hope it would generate a fan base for Princess January and YOUR CHOICE... Thanks so much and Princess January told me that she loves you and is looking for an assistant! I told her it was the feeling of humbleness. She didn't get it. :) Thank you @kimluster and @Banes! @strixvanallen, Princess January would love for you to be her campaign manager for next year's awards. She doesn't care what she is nominated for...seriously, she's that easy! :0 @fallopiancrusader - it was an absolute honor to be able to redraw your gowns. This one was a drawn to be a replica, and then I added in pieces, but it's definitely your design. This collaboration meant so much to me...Thank you.

I thought Death P*rn was romantic! ;)

you should write one el cid.

Congratulations, Simply Sarah! And... uh... Princess January... Of course we will nominate you. Why wouldn't we, right?

congratulations to Simply Sarah. @Vinomas: I love what you did with her gown, and that hairdo is stunning!

Congratulations to Simply Sarah! And a wonderful presentation VinoMas!

I would like to give this presentation an award for starring Princess January. She has become quite the celebrity on the Quackcast episodes, it is nice to see her character design. Great job, VinoMas!