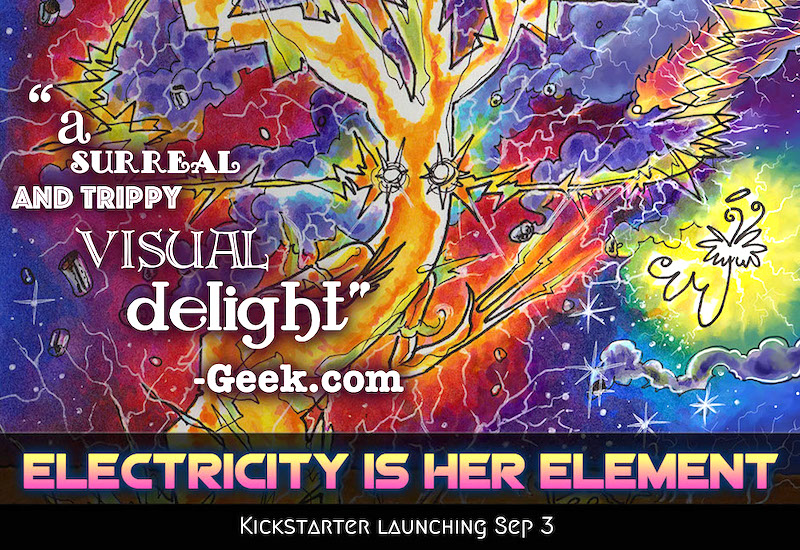 Hey folks!!
Sorry this is somewhat last-minute notice but the KICKSTARTER CAMPAIGN to fund the 2nd printing of “Electricity is Her Element” comes to a close THURSDAY OCTOBER 3 at 7pm EST here: https://www.kickstarter.com/projects/katcrow/electricity-is-her-element
The comic book is up for grabs as well as an ENAMEL PIN designed specially for the campaign, as well as original art!

I have been considering this Kickstarter the OFFICIAL LAUNCH event for the book even though it was in print before, because this has really been my opportunity to broadcast the news about the project and try to get the word out as much as possible that this project and story exists. More stories in the universe of KerBop are coming soon, this is the debut and the initial story and I'm so glad and grateful to have had so much positive response from it :)
You folks at Drunk Duck have been some of the most amazing supporters from the start and a special thanks goes to you. A few of you bought the book in its first edition, which is one of the reasons I designed the enamel pin (for those who already got the book and want something new :) ) the hand-drawn art in markers is also available.

Hopefully this note reaches you guys before the end, but if not I hope you'll be around when I start uploading the next chapter in the story of KerBop the Angel, called “Filaments” starting up soon!