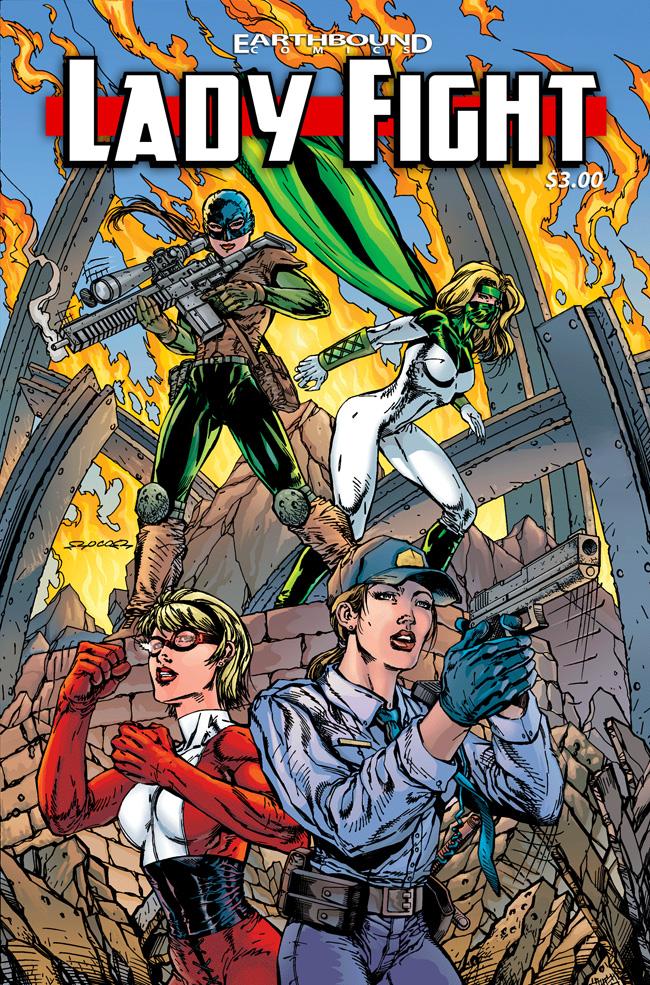 So here's the cover to the first Lady Fight, which corresponds to the first Explosion Proof story that you've read in this set.

The artwork was by the amazing Cedric Nocon, who's list of credits is far too extensive to repeat here, but needless to say, he's touched a lot of mainstream American comics franchise characters. Luckily, he's also a pal of Ben's and we commissioned this amazing cover from him for our first Lady Fight issue. For you process nerds (which I'm sure is all of you), the artwork is 100% pencil (no lie, its hanging over my drafting table)– but they're super tight and dark, so I just adjusted the levels and WHOOP! Looks an awful lot like its been inked!

Color credits go to the equally fantastic Mr. Steve Oliff, who, an even closer friend of Ben's, is some one you ought to wiki. If you don't know who he is you should. Steve and his company Olyoptics basically pioneered computer coloring in comics, and he's worked on probably any book you can mention– most recently I've caught him doing issues of Savage Dragon here and there.

Not trying to name drop here, but these guys are fantastic artists, so credit where credit's due. We are super proud of this cover as the kick off for the team up between Ben and I as Earthbound Comics.

Oh, we've re-vamped our site a bit if you want to check it out: http://www.earthboundcomics.com/

No real comment replies this week except to respond to DAJB's comment about not expecting EePee to be wearing red. It was actually a fairly arbitrary decision. My concept for EePee was that she wasn't a superhero in the technical sense, so I didn't really want her to have a definitive costume the way a superhero would– other than that she's always wearing those goggles. And as you'll notice, I haven't really deviated TOO much with the design, overall you'll see she kinda changes her close every go around.

Well, when it came time for Steve to color the above color, I had never worked out any color schemes in my head. Ben asked me what color, I think i probably said “I dunno, whatever” and Ben said, “How about red?” “Okay” and Steve kinda took it from there. Then I guess it kinda stuck, cause even though her outfits went through changes, when the last two covers got passed to Rob Nix, he carried on with the red (I mean, I never told him otherwise). You can see they both went with two very different outfit designs, even from what actually appears in the story!

Interestingly enough, both of the colored versions have gloves, too, which she never has gloves in the comic. But that's just fine with me!

So there's way more back story on the red costume probably than anyone wanted to hear. Tough!

I might come back and post the #2 cover next week– why not? EePee just has a head shot on there, but… y'all ought to check it out.

As always: Thanks for uhhhh reading? And commenting!

Oh, hey, I've been loving the twitter lately, so if anyone wants to hit me up there, my name is InkOutside