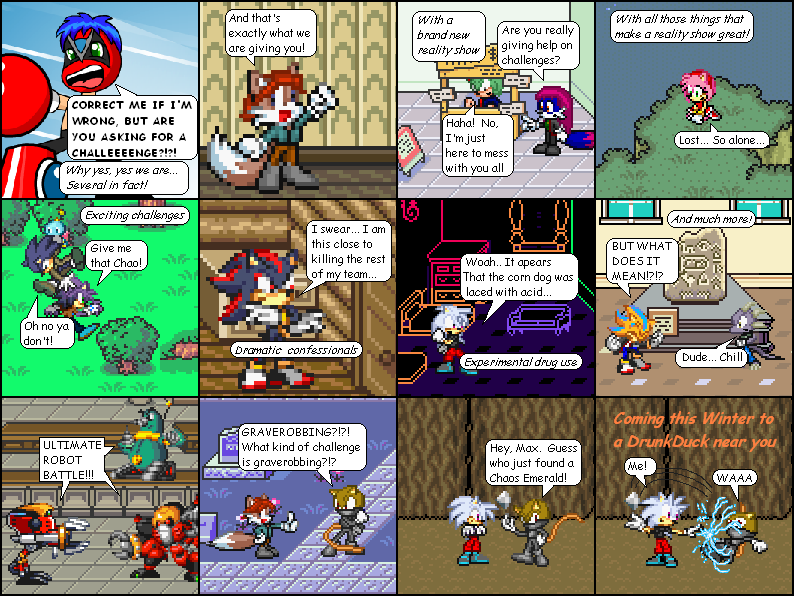 So here is what i have been working on during the time that i have been grounded. A REALITY SHOW SPRITE COMIC!!! I'm gonna be honest, my inspiration for making this was watching Total Drama Island. anyways to the comic

Basically it will consist of everything that makes up a reality show, challenges, confessionals, and at the end of every challenge a member of the losing team will be voted off!

And guess what else… YOU get to be in it. That's right, most of the cast will be made up of cameo characters. Just send me your Sonic styled sprites and you will be in the comic. Send in as many characters as you want, but you are only guaranteed one character slot so tell me which ones you want in most if you have multiple entries. just PQ me the sprites and a description of the character.

This will probably be replacing It's Ninja Time as my main comic, for reasons that will be explained in today's Ninja Time update

yes, yes you should

I SHOULD JOIN TOOO

I shall also join !

I'm going to fave this. So I can keep a eye on it.

I shall join too!

Meh, what can I say? It grabbed my attention and it just happened to turn out to be a comic by you >_>

wow that was fast

Wow, haven't seen you in way too long. Anyway, faving this and may join.