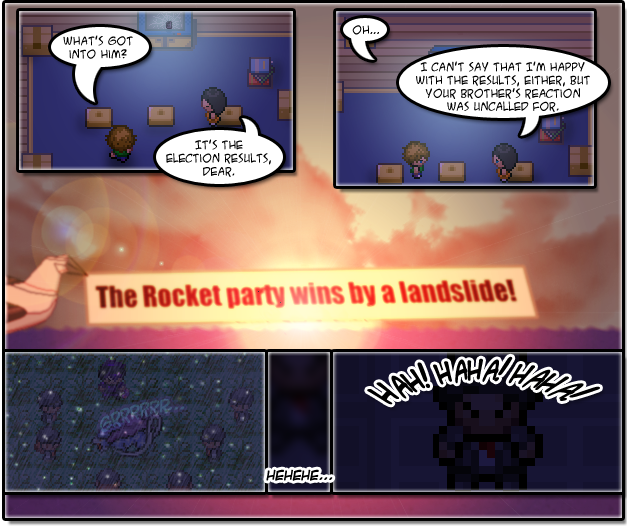 I kinda feel like the artistry of ‘panel’ 3 might distract those from the plot aspects of this page.

This is, for all intents and purposes, the end of this most prologue-ish chapter. Enjoy.

~I might continue this someday, but I feel detached from the storyline and don't really care about pokémanz that much yaknow? I've like outgrown it. My comedy pokémanz comic will still be updating (soon anyway), so you can check that if you want. :D)

hey good comic hope u continue with it

This page is nice, I'm not a fan of the speech bubbles but not bad. Panel 3 looks great, you really get that feel of Suicune being screwed. However I'm not a fan of panels 4 & 5. Panel for just feels like an extra panel thats really dark. Panel 5 is less dark but doesn't really have that "evil laugh" feel to it. That effect of an evil laugh could have been performed better, but hey good stuff though keep it up.

Im gonna be spending about a week scripting chapter 2 and building a buffer. Basically, I plan to update weekly until I've made most of chapter 2. Once I have a sufficient buffer I'll do updates every other day.

What's with their eyes in panel 2

Oh I see, yeah, that could be changed. xD And you're right, I should get someone to look over it before I put it on here. And I'll do just that. :D

O and by paneling I mean style, the little white glow in each panel can be dropped, as can the stroke be lowered.

Well make sure you show pages to people before making public. It's amazing what you can overlook. I tend to screencap most of my comics as a make them to a few friends, the occasional suggestion can work wonders for a strip.

Nah, it doesn't hurt the strip THAT much. You're just stressing over nothing. ;) And I don't have a problem with your panelling. I think it's great, you should keep it like this. :O I just started reading the Pokespecial manga myself. Hopefully it'll inspire me too. :) And I will put the comic on here, just not yet. You know how lazy I can be with my updates, right? I thought it'd be best for me to make about 30 strips in private so that I'd at least have a solid backlog of strips to kick me off whilst I continue making strips. That way, I'll be able to find any mistakes I make on some of the strips before it's even put up on here. And heck, if I get even better making the 30 strips or so, I can just revamp my earlier strips so that they would look great from the beginning. ^^; I'm planning on putting them up in Janurary, so you won't have to wait for too long. :)

Glad for the input.

Oh right, I forgot to mention king made that smashed tv sprite for me xD I'm very much considering refining the style for the comic for chapter 2(not always circle bubbles, thinner stroke on textbubbles, simpler layout on the panels, etc), this comic, at first, was mainly insprite by the pokÃ©special manga, thats where a lot of the freepaneling ideas came from, before I started getting more frisky with my own choices for effects and style. initially the 3rd panel was just a wide panel, but when I duplicated the layers to merge them and add the lens flare(12 layers, ofun), it released the clipping mask, showing that it looked pretty cool covering the whole page, so I went with it. I still think it ruins some of the dramatic edge of the script, since it kinda fills the whole page with warm glowyness, haha. You should totally update on DD so I can read the comic you're making conveniently. ;p

lol, just realised he threw the remote into the TV. xD

Panel 3 was a bit distracting... but it's still alright. How come you don't use pointed tails anymore? It would seem pretty necessary in panel 2 when the curved tail doesn't reach the character. Everything else is as always great though. Might have to re-edit some of the strips I've been making privately so I don't fall behind you graphic wise actually. ^^;

Looks called for by me.