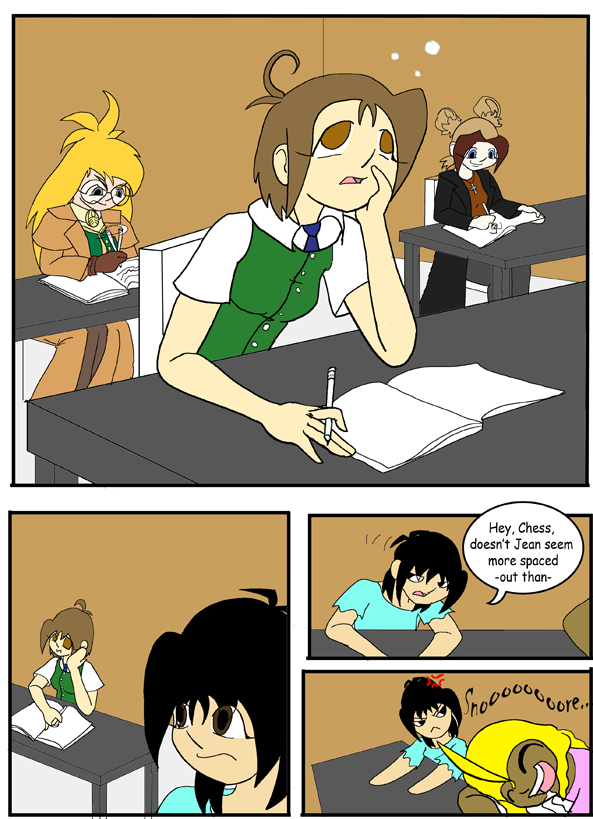 Sorry it's a little late, but my Dad and Step-mom insisted on having a random night of lovin', which meant I was sent off to watch Iron Man rather than being here doing a comic.

Anyways, I have a couple cameos in here.

On the right is Amelius, a character by the author who claims the character isn't her, Unlife is Unfair.

The spectacled one on the left is none other than Agatha Heterodyne of Girl Genius, who's sibling comic:Buck Godot: Zap-Gun for Hire has garnered me a lot of pageviews as well as being my most expensive ad. I appreciate the patience the people coming from there to read my comic are showing. I'll toss a line to the people at Airship Entertainment to let them know I've cameoed a one of the characters from a great series.

Agatha!!! and that one other chick...

is that amelius i spy?

Love the girls in the background of the first panel. And I love the last panel. Lolz.

Agatha is looking good. A bit too old for this class though.

you should try her coffee. It is perfect.

those jokes were old when takhashi used 'em, but i can't less then five something that's referencing foglio.

YES! ...Uh, I mean: Oh noes, there was a lasting impression. But when did Gene become "Jean"? (Nice cameos too.)