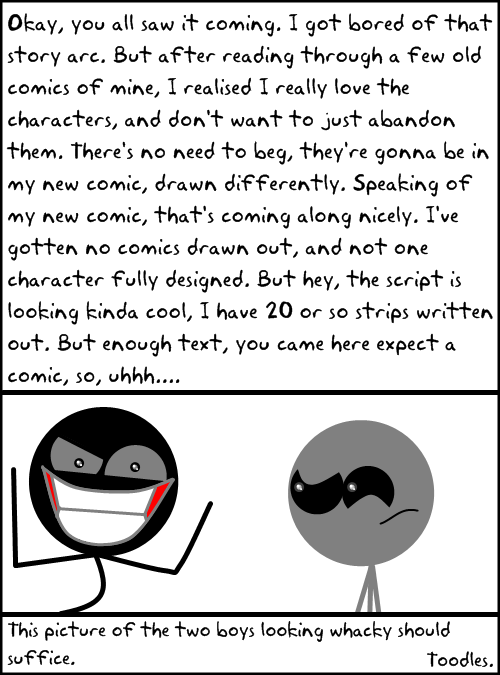 Frank and Vinny #something and three

And thus, I officially stop making these comics.
I'm gonna start making my new comic reeeeeeal soon. I'm hoping to make an actual story sometime, instead of a strip, but that's far away.

When I start the other comic, I'll make a final update here directing you there.

So there you have it.

Good luck! (Bring back Moe in it!)

I understand. Sometimes you just gotta move on! :)

In that case, good luck on your new venture.

This reminds me of my transition into GIADC :P Like the characters, but need a new project? Wanna do a real story? I'm happy to know though, that you are still thinking about your work here, and will continue...I miss it :(

Excellent! I am sated...^,^...it's great to see the boys again, and I'll look forward to your new comic. (It's cool that you want to work on an actual story...your creative genius wishes to expand, and that seems the best way to do it.) And I'm darned pleased to hear you're not forgetting F&V totally! Congrats on writing out the script! (That's always the hardest part for me...) -_-

I think most people would be satisfied with pictures of them looking wacky.

Lol frank. EVERYTHING EMILY! THAT'S WHAT!