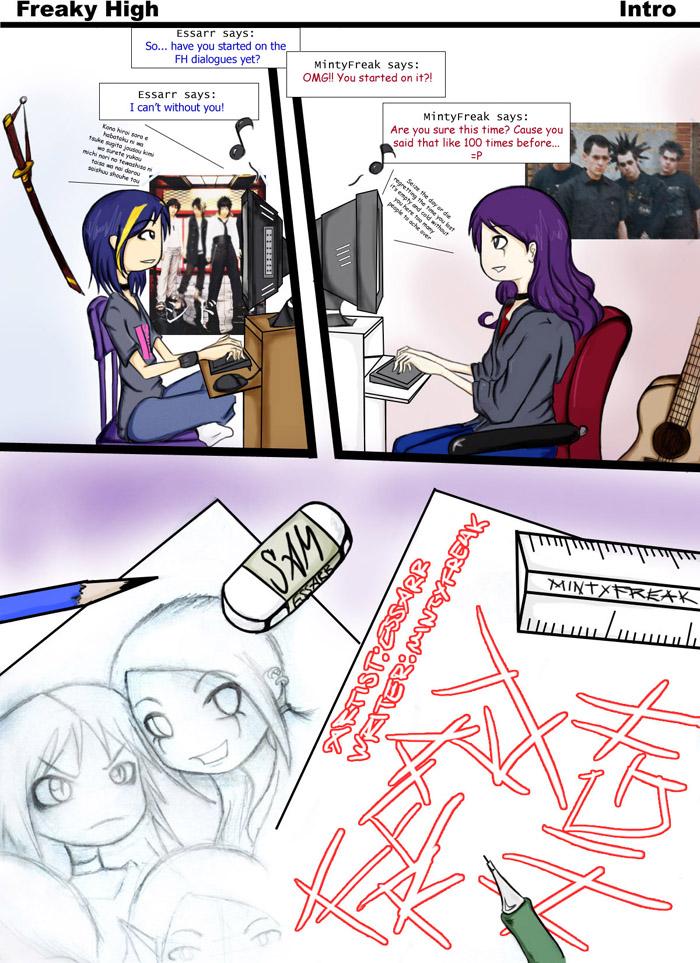 Yeah… this is actually a true story thing that happened today. Well, technically yesterday since today's already tomorrow… errr. Yeah anyway! Lol. I worked on this page the WHOLE day. The whole sketching, lineart-ing and colouring. Damn my hand hurts… So there you have it! The intro to Freaky High!

Oh, right! I need to introduce myself!
I'm known as “Essarr” I was formally known as “Samrin” here at DD before with a comic called “The Way It Is” (TWII) I don't know if any of you remember it. It's just… well semi-permanently dead at the moment. Major writer's block for Khay. So anyway! Yeah, for those who noticed that the style is different, is because well, MintyFreak doesn't really like anime. So I altered my style to suit our comic to both our likings. This was inspired by Tim Burton and Kirby aka Ziggy (an old DA friend of mine) as well as from Clone High!
They're awesome. And of course I still put in a bit of my own in, besides this was created in Grade 8. We just got a stable storyline (if you want to call it that lol) now. So… Yeah! And that's true… I said I'd started FH soon but I always end up not– but I FINALLY got to it. Gah! XD

So anyway! I'll leave you all with that! I think I need to fix something in the dialogue… but it's 2:45 am right now… so I'll do that tomor– errr later today hahaha. I also might make the page bigger… I'll see about that one. MintyFreak doesn't know I finished yet! I'm gonna surprise her with the link to here! So later guys! Until the next update!

AND DON'T MAKE FUN OF MY SWORD. LOL. I KNOW IT LOOK STUPID. XD

EDIT: I NOTICED I HAVE SOME PHOTOSHOP BOO-BOOS! T_T I'll fix it up soon… after sleep. Sorry!

EDIT 2:
Okay, I fixed it up a bit! Hopefully it can be read pretty well D:
And I added lyrics! Cause I forgot to last night lol.
On my side it's SID's Chapter 1. On MintyFreak's side it's Avenged Sevenfold's Seize the day. Much love to those two songs!

you art is so pretty

Whoah, this comic has a lot of potential. Can't want for the enxt page!

:O looks like sam & christina got talent!! but i really think mikey would notice that she was missing... lmao

hey sammy! you started a new comic!!! yay! i love your art and always will do! anyways got nothing to say but to keep this one alive! looks good ^-^ anyways yea!

Pensuke: Thank you for the 5. ^^ Ein: Lol yes, this was what I was drawing. Yes, I will indeed keep up with this one Ahahah xD Jeff: Yeap! This was it! Hahha thanks! Expect one page a week or something... unless it's random updating ahahha. Captain: Thank you, sir! =D

Sooo Sammy this ish what you were doing last night eh? Hehehehe I hope you keep going this time. >=P (not one to speak) XD

Looks to be quite interesting