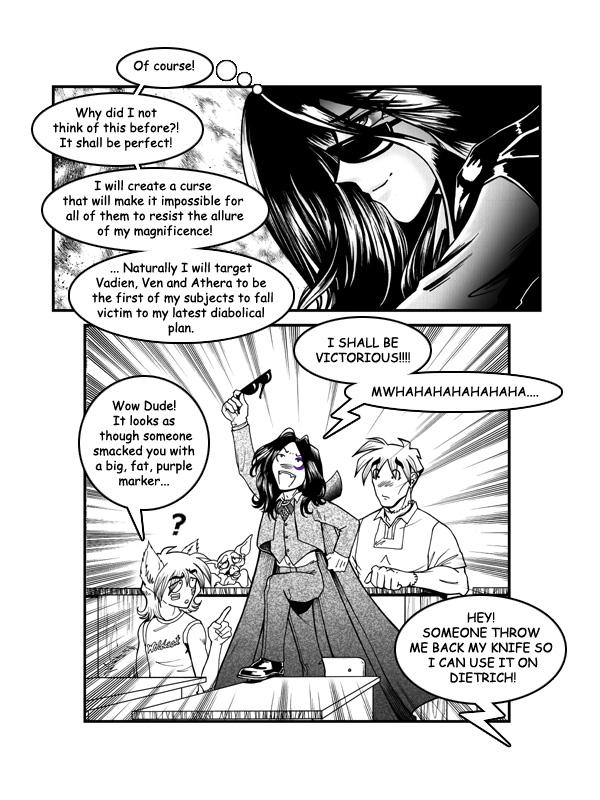 I know its a long time coming but what can I say… holding down 3 jobs suck. However recently I injured my back at one of my jobs and am unable to work. So its given me a little time to catch up on my webcomics. I hope you enjoy. For me, its back to couch…. again. Did I mention that pain sucks too. *sigh*

LOL. Well, I really DO hope that you recover and feel MUCH better Gigi! I was surprised to see you were still here- lol, I only did like two deployments in Iraq, and I finally got a chance to look around the new Duck when I returned from MilServ. I was around on the old Duck for quite some time and used to talk to You, DT, & Zoe Stead over at Earthbound. WOW. Time sure DOES fly around here! Oh yeah, and TokyoPOP would be a good call too, I think!

[quote=Gigi]Slayer I can't believe you still remember me after... wait how long did I disappear for this last time? 9 months???[/quote] If there is one thing i am proud of, is that i never forget about my friends. 9 months is nothing anyway, i once had a friend who i didn't got to see or talk for nearly 8-10 years after he moved out and i still remember his phone number. Sometimes it may seem like i forgot, or that i don't care because i don't say a word. But that doesn't mean i don't care, it's just how i am, i'm the silent guy in the corner watching everyone do their things without bothering or interrupting. Plus, i admire you, as so do many other people.

Oh that reminds me. Platinum Studios has published and isretailing my first full length graphic novel " Love Bytes" Written by Josh Elder, One of the winners of TokyoPop's rising stars contest. The cover art was done by Carly Wagner of Platinum Studios and everything else.... is me. I penciled, inked and toned the whole book. I know.... what was I thinking... It's no wonder I suffer from RSI. Anyway DrunkDuck is posting the pages here http://www.drunkduck.com/Love_Bytes/ However if you're interested I'm selling copies of the book for $10 a piece. Contact me at quiescenz1@msn.com if you're interested in buying a copy. Please put in the subject line "comic book" please. :)

ACK! My message got cut off. _ coninues from last post. If flying is possible. For a family celebration/vacation. Guess who's in charge of all of this? Me. Anyway... I was also offered a great job as creative director for a chain of local restaurants. Which was an opportunity I couldn't pass up. But yeah with it I'm up to 3 jobs now. Oh Major. If only I could land a gig working for Disney. Though I'd prefer TokyoPop. OOOOPPPPPSSS! Um... I loved working for you too Platinum. *looks embarrassed*

*waves* Hey everybody!! Nah... just broke. LoL :P So much has and is about to happen that holding down multiple jobs is a nessessity right now. Slayer I can't believe you still remember me after... wait how long did I disappear for this last time? 9 months??? In that time I became a grandmother! Woot! Hannah married a fine young man by the name of Andrew Ruff... *giggles* her initials are H.O.R. now Mwhahahahaha. SHHHHH.... she'll kill me if she reads this..... anyway, My grandbaby's name is Katarina Sharon Ruff. She's 4 months old and quite the ham. :D Ouch Jiro! Yeah initially I thought I had pulled a muscle in my leg but the pain wouldn't go away . So last week I went to see the doctor and it turns out I dislocated a disc in my back and its pinching some major nerve going through my leg. So I feel your pain. Literally. What else is happening.... my Daughter Venessa is graduating from high school in a little over a month! All my babies are growing up! Man, I'm getting old! Of course graduations are a huge deal for my family so I have a lot of family flying in

I was trying to find a creative way to wish you well, but i can't figure anything so "Generic Well wishing". Y'know, i almost scream like a girl when i saw you updated.

Dang Gigi! THREE jobs?! I would've thought you'd be working for Disney or something by now!! But I'm sorry to hear about your back injury too. But I'm just glad you were finally able to update. Hope to see you around the place more, of course. Do we need to send you cards and teddy bears and soup and stuff? You know we will, lol! Feel better soon though, Gigi.

Hope you get better.

Holy crap, it's a new page! >o> I know all to well how getting hurt like that can be. Just got back to work from being off for a month and a half cause my foot was so screwed up I can't do anything. XP Page looks good by the way. 83