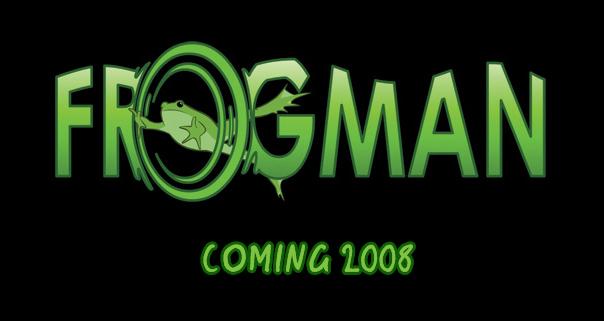 That's right ladies and gentlemen, Frogman is coming to Drunkduck in his own full colour comic series! Eventually I'll be printing this through Lulu as a 5 or 6 issue collection.

I wrote a 24 page script about 4 years ago, but when revisiting it I discovered that it was absolute crap, so I rewrote it. The new script is awesome (even if I do say so myself). This isn't your grandfather's Frogman either. I decided to make it a little more hardcore, so it's not for kiddies. Expect swearing, violence and probably even nudity. Oh, and don't expect a gag a page, this is going to be more of a serious thing. Sure, there'll be funny stuff, but I just want to stress that you shouldn't expect a comedy.

The whole thing is based in the area I live, because not all superheroes live in New York. So expect to see real life places that you could look up on Google Earth if you feel obsessive enough.

This comic will be drawn on pro sized comic boards with traditional inking and comic colouring. I'm gunna aim to update once a week, but that might change to fortnightly depending on how much work it ends up being (and how I go with the whole job hunt thing this year). My other comic, Ultimate X will remain a weekly strip though.

Expect the cover to chapter 1, soon.

Oh, and here's a little teaser of some characters in the style I'll be using. This was just a trial, so expect the lineart to be more crisp (didn't have inking equipment when I did that).

This looks like it's going to be great, can't wait until it starts (though I suppose I'll have to).

Oh, and the logo kicks all sorts of ass. ALL sorts.

GLEE! This is truly exciting. Welcome back to the world of Superhero Comicking. Expect to never ever see a REAL naked lady again. Lord knows I haven't since I started Zom-Ben.

Yep, it's going to be all me. I might run script or art past others from time to time to get opinions, but ultimately I'll be doing everything.

awesome teaser man, great coloring! can't wait to see you doing a different comic mood. Is this a "solo" project?