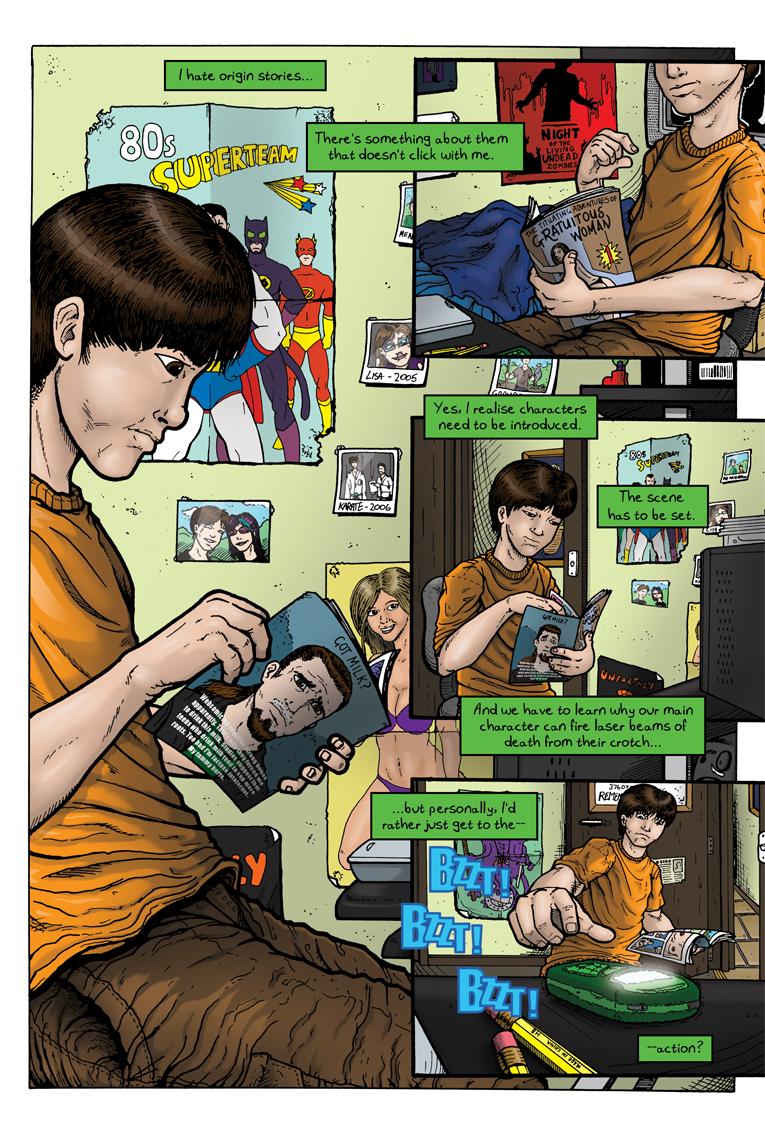 Introducing Steve Miller. Lots of stuff in the background of this one. Hopefully it'll give you an idea as to what type of person he is. Yarr, there be boobs on this page too! (You have to find them though, it's like a ‘Where’s Wally?') See, it totally deserves an ‘M’ rating…

Also, a cameo by me (as seen in Ultimate X in the ‘Got Milk’ ad. Did you notice it before I told you? So you don't strain your eyes trying to read it, the text says: Webcomicing requires strong bones apparently. That's why they forced me to drink this milk. Studies suggest that teens who drink milk tend to cop more roots. Too bad I'm lactose intolerant. My tummy hurts. ‘Cop more roots’ is Australian for ‘have more sex’.

Here's an interesting note: Steve was designed after an 18 year old me.

Awesome. And I totally noticed you on the 'Got Milk' ad. lol.

looks good! love the feel of the page with the rough inking in details.

jkarguth - Glad you liked it. :) ssvegeta - Cheers, mate. walkingman - I'm guessing that's French for 'showing boobs', right? I only speak 2 languages. English and bad English. literacysuks1 - Thanks man. I actually hate drawing backgrounds, so this is a challenge for me. Dez - One day they shall find a cure... one day... Locoma - No! Not your eyes! Hope they're not too strained. I don't want to be the one responsible for you not being able to see well enough to continue drawing Locoma. SympleSymon - Thanks. I can't wait until I get more pages up. Blastov - Well, this is going to be a bit slower paced than the usual thing I see where it starts off with the hero in the middle of a fight. I'm going to do some more character stuff before getting to the drama. Dangerface - Thanks dude, but it's nothing compared to the awesomeness of your work. legacyhero - Thanks, I'm a bit OCD when it comes to details sometimes.

I feel that way too. I kinda like the delayed origin story, though, where the first appearence does not tell the origin.

Hey, great start! Can't wait to see where you go with this.

frog-phone! Woah, love the lighting and the drapery, looks very detailed. I spent way more time looking at the details, hehe. And I strained my eyes reading the got milk ad before reading your author's notes :D delicious page

Dang, I just love the art on this, and the very small bit of writing so far is good too. and thank you for actually drawing backgrounds! All of the background less close up after close up comics on here are becoming a pet peeve of mine.

Been waiting for this. It didn't disappoint. I noticed the tits first. Then went back up to look at what he was reading, had a good chuckle. Then damn it all I had to look at everything, you have good control of the background and surroundings, it really feels like a camera tilting around the same areas, as opposed to just resorting to new backgrounds or something.