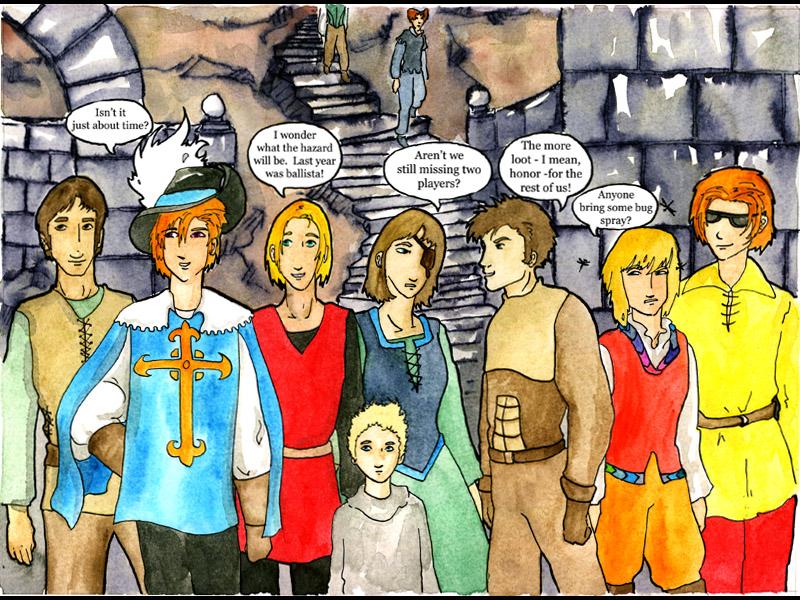 Ooops. This page was supposed to come before the previous page, but it doesn't really matter, so here it is now. Sorry for any minor casual errors.

From left to right (and ignoring Tighe and William):
Tom Nearford of Thunder Roarer, Dillon of Dillon (who is dressed as a musketeer for fun's sake), Aidan of The Krae (un-bitten here, and his hair my be too light), Siilas from Two Moons looking scary and androgenous as always,Joan of Hurrock's Fardel (Drake wanted to play, but it's too silly for him to hide in a cloak for all of the panels), Casper of Darken (old costume, ‘cuz that was my screenshot reference), Syrin from my own comic A’kni'att (what? You never followed any of my links down there?), and last but not least Reuthin of Oh Brother Qlippoth whose name I've probably spelled wrong (and who insisted on keeping those darned anachronistic shades).

Whew! I restriced myself to characters who could pretty easily pass for human, and then still ran out of room.

Heheh... yes, crazy people make crazy things ;-) I've logged "Keck" as well as the other references (Thanks!), and when I'm through with this strip, I'll have the entry updated! :)

Hogan - Wow! I had no idea such a thing existed. . . something akin to a reference is [url=http://www.drunkduck.com/Fated_Feather/index.php?p=16665]here[/url], where "keck" is used as a swear word. I made up that word in a'kni'att, and you can see it pretty commonly in Gnoph.

THIS was supposed to be the link... :-/ http://crossovers.dragoneers.com/index.php?comic=Gnoph

I'll be sure to catch up! AND to catch up on my own updates along the way... http://www.drunkduck.com/Gnoph/ ;-)

iagojester: Boy, Howdy! The only problem will be juggling all these guys. p.s. Oh. Okay. alejkhan: And it is my readers' responsibility to tell me when I am boring/frustrating/alienating them. In the mean time I'll just have fun. And all of the things in the background are fake - I'll clear that up soon. AshleeS: Wheeeee! My first Tighe art! THANK YOU! And he'd be doubly confused, since "truck" where he's from means "to carry a burden," which wouldn't be all that complementary. And Dillon was already hawt. kaminari: Thanks! Krae: Sorry about the hair - I honestly couldn't remember what color it was supposed to be when I was coloring this page. Blonde just felt right. Fyrsiel: I'm glad that I'm not the only one giggling for this chapter. . . and that I guessed Ruethin's relative height correctly! Hogan: Hello! Thanks! I've been struggling with color for quite some time, and it's starting to feel okay. Keeping up shouldn't be too bad - I update sporadically, but if you check once a week there should be an average of three new pages.

I'm really impressed with the details and colors put into portraying such different characters... EVEN if it will probably become the death of me trying to keep up! :-/

xxxDDD WOOOO! Aye, his name is spelled "R-u-e-thin" and the best way to remember is that a root word from the name is "Rue" as in you "Rue the day you were born." xP Kinda like Gatsby and the play off of guns or however that worked. ^____^; *supersecret-comic-triviaaaa* Actually, I love the fact that you drew him tall, because it is very accurate for his design. xD (For some reason I always ended up drawing him tall) xD AAAAH HEE HEE! I totally saved this page! *points* YEEEE TOM from Thunder Roarer! XD!!! This is sooooo cool!

p.s.: On the last page you apologized for "mispelling" Wolfe's name, when in reality you spelled it correctly and it was I wwho mispelled my own character's name. ^_^ Cheer to the Kajness!

Heart* It's Dillon! And lil Siilas! Can't trust her. She'll probably get the win.

Syrin just cannot get away from the dragonflies. So they dress up the light folk in period dress and watch them battle it out for their own amusement(with prizes for the winning combatants)? Clearly, it's a good time for one and all. Especially with the colorful commentary by Lord Hormuz.

Wohoo! Aiden looks quite dashing as a blonde! I'm glad you're having fun, this looks like quite the entertaining chapter up ahead of us. And it seems you have kept your promise so far, there hasn't been an angsty moment yet! :D

Oh, I forgot! Because Dillon hit 3 years, I made you something for being a reader of mine! http://www.drunkduck.com/Dillon/gfx/Tighe.PNG Iagojester, here I come!

Dillon looks so hawt, Mina. What a cutie you made him! And Siilas looks awesome. (That's how you spell it, right?)

Hey, if making your comic isn't fun you shouldn't be doing it. Well, ok, maybe not, since the feelings of us readers are what really count........... Nice random ancient castle steps in the background. Was that built as a fair prop or does it really exist in this world?

You really do seem to be enjoying yourself. ^_^ The colors are very vivid on this page, and I'm impressed by the depth you added with the background even though it's a very "up front' kind of image.