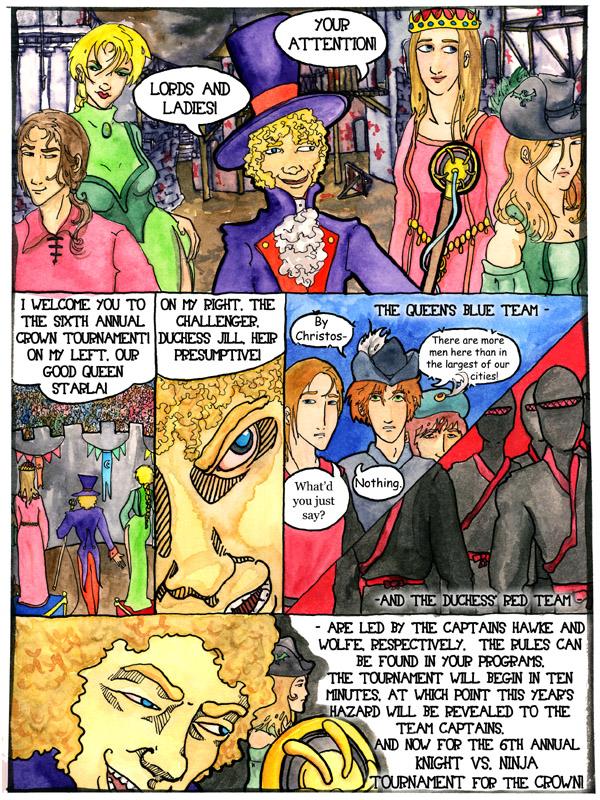 Here we have Starla as our Queen, and Jill as the sexy challenger. The rather evil Captain Wolfe seemed the obvious choice to oppose Captain Hawke (also from Fated Feather). The announcer is Lord Hormuz, one of my own characters.

And the obvious color cross-balance in the top panel? why, no, I didn't plan that at all. . .

Sadly, the ninjas do not last. Someday they shall return.

Just when I thought this comic couldn't get any better, you added ninjas. XD

Ah.... Yup. Muddled up right well. xD I KNEW I'd seen that funky wall-eye before.

Any event is enhanced by the immense announcing prowess of Lord Hormuz!

lol, whatever the case, ninja's were certainly the best choice of advarsary... if for no other reason than the internet hype revolving around them.

Oh my! O.O This contest will Rawk!!

Wow how cute. (I almost thought it was ME challanging Starla. My real first name is Jill.)

Putting in others characters? A nice experiment. I wonder how Shiro would fare here.

Starla looks absolutely awesome! Hormuz... didja' like him enough to bring him back? :)

Kaminari: And oni just would be too colorful here. . . that was one of the problems that I had when picking characters to rip off - I mean, "borrow," - trying to find ones that could pass as human! iagjester: Sorry for the extra "e" on Wolf's name. It just seemed to fit Ye Olde Spelling. And as for personas - I'm curious how I'm going to manage it, too. Komiyan: Nothing says Evil and Sexy like being the female leader of a Ninja Horde! Alejkhan: Yes, but that was too long to fit on the banners and flyers. And, heck, NONE of the characters I'm using are knights anyway. It's more like ninja vs. lordling vs. pirate vs. soldier vs. . .

HAHA! This is great. But isn't this technically pirates v. ninjas v. knights, what with the Captains involved.....?

jill WOULD find ninjas :D setting matters not to a duchess.

Ah yes... Captain Hawke and Wolf are PERFECT! Perfect looks, perfect countenance... I love it. Hormuz's hair is just WILDE! I'm curious to see how all these characters maintain their personas... so many!

I was joking =p I dont have any actual ninjas, just samurai and oni

Kaminari: To be honest, I don't think I can throw any more characters together without losing track of them all. The next page will make that obvious. Fyrsiel: Hormuz never made it to Kingship - he's the younger brother of King Kin Jasrud, who was assassinated by Sally's brother Jair. Hope that muddies everything up for ya. Subcultured: Thanks for the vote! I love the changing faces in your avatars. Krae: Notice anyone. . . familiar. . . on this page?

You can rent NINJAS? I had no idea ;D I could'nt help but notice the casual spatterings of blood here and there. Looks like a delightfully creepy stage ^_^