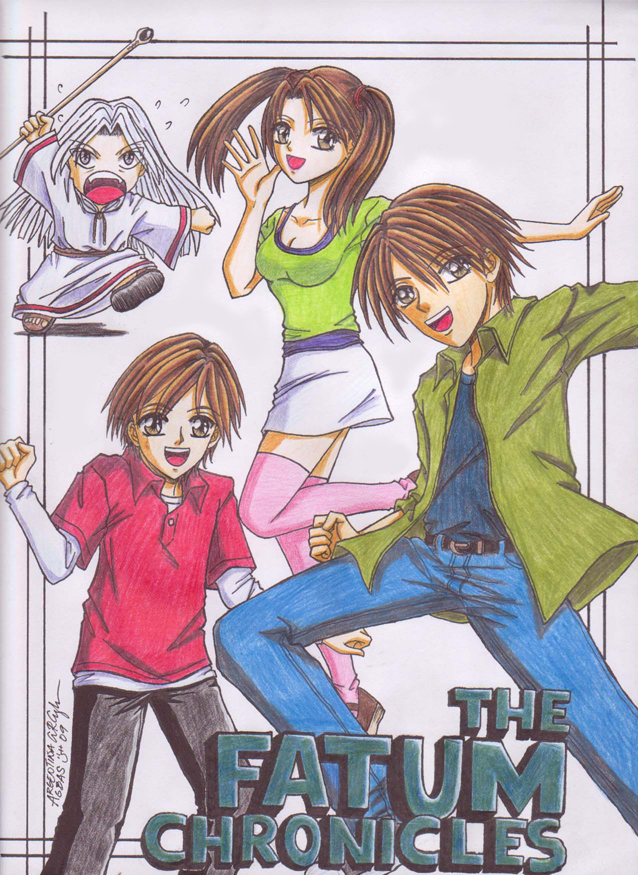 Okay, I said I had a real page for you for today, I know. I'm going to upload it tomorrow but I just wanted to show this off first.

As many of you may be aware, a few months ago I announced Fatum Chronicles was being picked up by an indie publisher/art studio. A few deals were made and it looked like it would hit stores by yesterday, with an anime being made for air next year. Unfortunately, for the past two months, problems have been arising.

The main one? Creative differences between my publisher and I. He knows FC is based off of GG, but wanted to change a few roles. The Wizard becomes a mistaken hero who was trying to prevent Gold, who was a mercenary hired by the Red Shadow, from destroying Fatum with a giant laser cannon the Guardian has. And no, I am not joking. He seriously wanted that for the plot.

But another big problem was, try as we might, we couldn't agree on the character designs. What you see above isn't exactly what I had in mind, but I still like it. He wanted some ‘bling’ and a backward baseball cap, along with Soul wearing an even shorter skirt and other stuff.

And finally, I found out our main distributor wanted to go with the 4kids method where the characters just sounded wrong and there was nothing but rap in the background. I am not exactly fond of the genre. Also, the ideas they had for the voice actors were sort of like Krillin from DBZ for the Red Shadow leader, Ash for Aussie, stuff like that.

Unfortunately, depending on your personal view, I liked this idea too much to see it raped. I still had ownership and was able to bail out of all the other deals, since most of them I hadn't signed into, until Fatum Chronicles was all mine again, but it looked like it wasn't going to happen.

I then got an email from a talented young manga artist who wanted to continue the project without that studio's help. I told her what I wanted, she gave me what you see above, asking the right questions and only making slight variations on my ideas, enough to give more of a flair and interest to the characters.

All in all, I'm happy. This way, I can do things my own way and without any pressure. Also, I don't have any real restrictions. I love it. I don't have the big step i was promised, but at least I can still be proud of what Fatum Chronicles is.

Pretty cool looking comic you got there Aussie Kid

just noticed this. you made the right call on the studio thing. it is one thing to have bad voice acting (it can be fixed later), but my god, they wanted to rape that plot until it was inside out. sorry it won't be as big as you had hoped