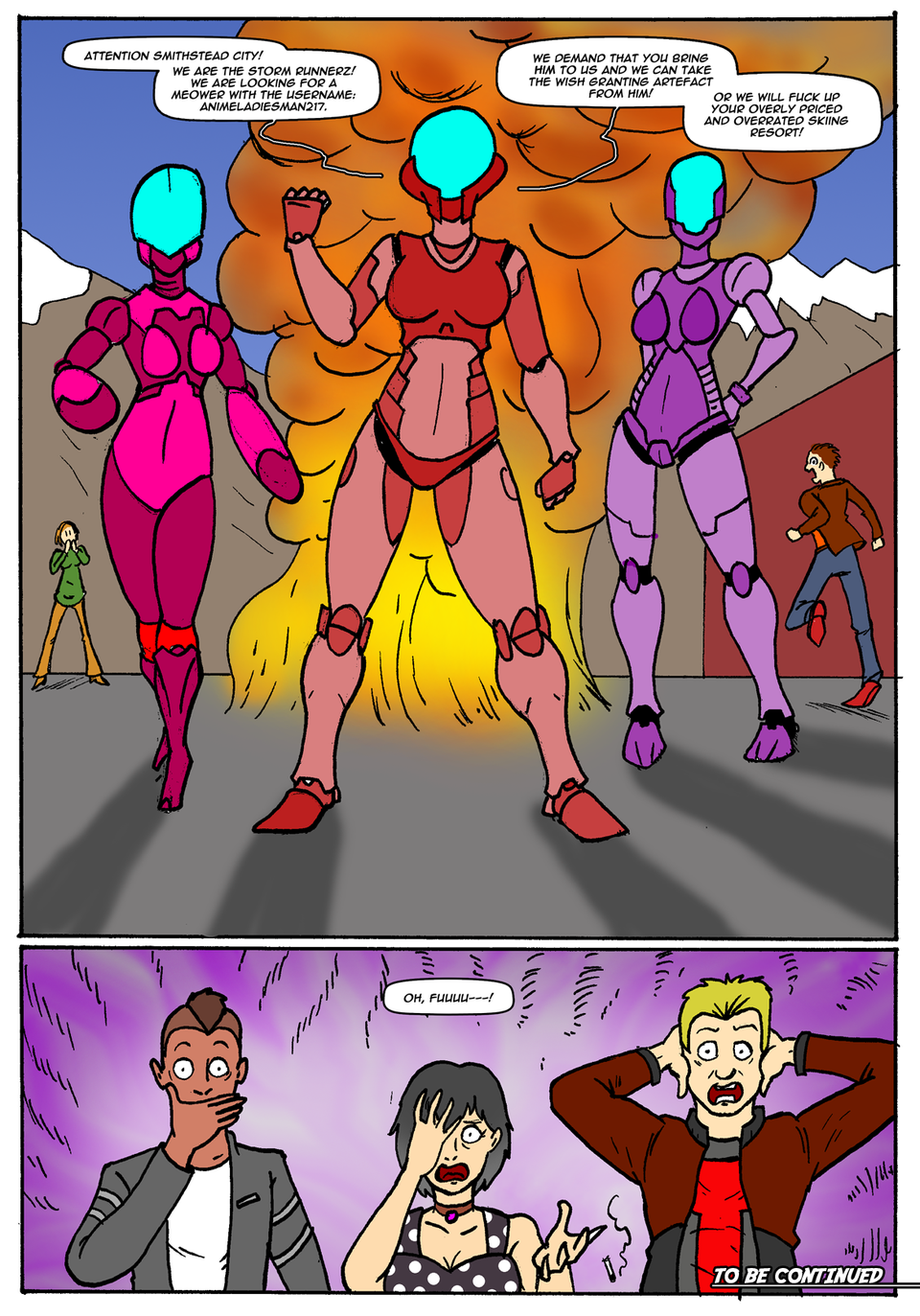 Well, finally this is it! The final page of issue 2 in this five parter that I hope that you enjoyed!
So yea, making this issue has been… difficult to say the least. Cripes, I can't wait to see how I will do with the next part where everything escalates to such a rate that it will be like watching a Michael Bay movie in frames.
But first, let me address the elephant in the room. For those who don't know, a “dead man's switch or pedal” is basically a safety switch or a failsafe that if released or deactivated when the human operator would fall ill then the failsafe would deactivate the machine completely. It is on mostly dangerous machines, vehicles and tools like lawnmower, snowmobiles, chainsaws ands… Locomotives. Yea, there is no other explanation or excuses other than that…
I didn't know! XD
Yea, for every pics I have seen inside the driver's seats in trains, locomotives and such for research, I never really saw the pedal that the train driver has to keep their foot down on to keep the train going and even when I saw it, I mostly assumed that it was more like a gas pedal or something that would be on those really heavy duty trains that pulls really heavy cargo and such or that it was only for long distant travel and not on a regular commuter train.
Heck, when I watched the movie “Silver Streak” with Richard Pryor and Gene Wilder where the bad guys put a heavy tool box on the pedal in the locomotive, in my mind I thought that it was more like a speed pedal, like make the train go forward so to speak and if let go it would only slow down to a certain speed because it is a pretty damn big and old diesel locomotive.
So yea, that is quite the huge plot hole in this issue that I didn't see when writing this. Then again, neither did my editors who helped me correct the script but the fault is entirely on me. But I can cover it up to two points:
One: It is true that most locomotives do have that failsafe but I can the keyword “most” as a excuse that maybe that the one model of locomotive in this issue, didn't have that pedal therefore allowing the train to keep going. Or two, we can say that Goldstar didn't know or think about the pedal either since it was a rather hectic situation and not everyone can handle so much so she only focused on some sort of lever or a button to make big machine stop working.
So yea, in short it was a huge screw up that I didn't know about but I can only learn from it.
Also the reason why I took three month long hiatus right in the middle of the issue between page 12 and 13 was that for some reason, my tunnel vision saw the panels in the pages were like tilted that I tried to fix but it turned out that I made it tilted instead. So I just lost energy trying to fix it, then mixing in other stuff that happened like getting Covid and make a recovery from that, my step dad's mom had passed away so that we had to take out the furniture out of her home and then when I finally got back to the comic, I suffered extreme chronic pain in the back of my entire left leg a week after I turned 40.
Meaning that while I was working on the comic, I had to make a slow and painful recovery while on high painkillers because the muscles in my lower back pulled on my sciatic nerve that goes from my back to the backside of the legs. The reason why the guy who help stretch my muscles and popping my limbs figured, is that due to my overweight and sitting too much might cause the muscles to experience the worse kind of soreness.
While the leg is better, it is still stiff and sore at times and requires some stretching to do and I have to do some small work out with a rowing machine and a training bike to kind soften the muscles so to speak. So that was a lot of fun.

Getting to the comic, I will start on issue three and it might take me up to a month to sketch the storyboards and then sketch pages ahead before I start inking them. But in the meantime, I do hope that you loved this comic as much I've making it despite the shortcomings I had to endure.

Yeah, I watch you on DA

I know, sorry. It's a odd glitch. I'm not currently doing new pages.

Used to operate freight locomotive that did not have a deadman switch , so not all of them have it , but if a car disconnects all locomotive air brakes lock down and the teain stops just fyi , anyway still a good story .

I didn't know you were posting this here